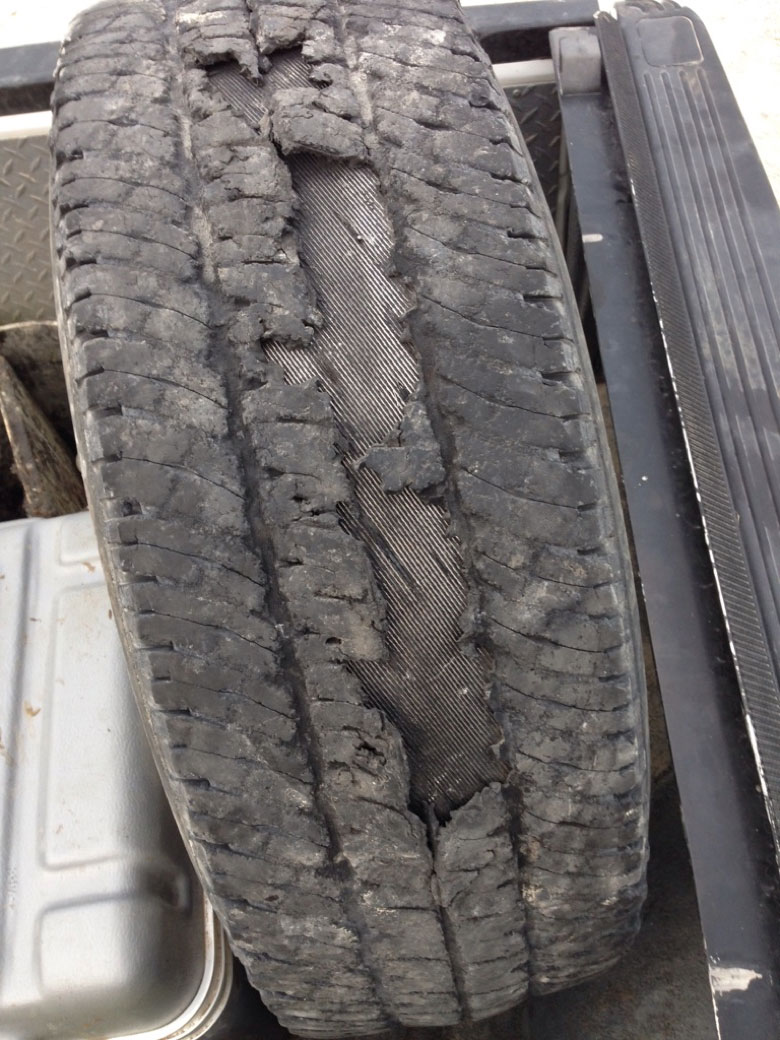 Thursday started out like any typical day of going out to ultrasound. (Minus the fact that we had to get up at 4:00.) Jessica and I were headed southeast of Kansas City to scan about 275 head. The trip was going quite smoothly. Jessica had fallen asleep in the passenger seat, I was cruising down the interstate listening to my favorite radio station, traffic was very light, it was dark and calm.

And right about then I was wishing I had listened to that little voice in my head. See, all day Wednesday, I had this feeling I was supposed to take my truck in to have the tires checked. And all day I kept saying, “I’m too busy.” We had to pour 90 yards of concrete, we had football practice, and we had AWANAs. I just didn’t have time to take it in. God was trying to tell me something, and I wasn’t listening. Oops!

So, back on the interstate, I decided I had better pull off at the next exit and see what was up. I grabbed the flashlight out of the glove box and took a look.

This is what I saw. Crap. The tire was still inflated, but it didn’t look as if it was going to stay that way for long.

By now, Jessica was awake and wondering what was going on. I showed her the tire and we just stood there for a second. The thought crossed my mind to just sit down and cry, but that really wasn’t going to help us out.

Now I have watched many tires be changed, but I have never done it all by myself. So, I called Will to see if he could offer any help. He didn’t answer. Dad was the next on the list, and I knew he would be up choring, so we were relieved when he answered. He walked us through the whole process and told us to pray and call back if we needed anything. And that’s what we did.

We found the handy little pouch will all our tire-changing tools in it. Then we found the jack. Then we got started. Right about then I was thinking I could play the “Damsel in Distress” card and hope a nice trucker would help us out. But I realized it was dark and no one had driven by and we were pretty much on our own.

The first thing we did was break the lug nuts loose. In the past, this has been my stumbling block. I could get the vehicle jacked up and everything, but I couldn’t loosen all the lug nuts. But God was with us! We got them all loosened.

Next we had to get the spare tire down. The entire process about came to a screeching halt, because we couldn’t get the tire down. We had the tool inserted into the slot, but we just couldn’t connect with anything. Finally, I told Jessica that we were stuck. We were obviously missing the tool that lets the spare tire down. But then Jessica said so sweetly and calmly, “Maybe they put that tool in a different place.” Hmmm. Maybe you’re right!

So we searched the glove box and found the Spare Tire Key. Hallelujah! We got the spare tire down, got the truck jacked up, got the bad tire off, and put the new tire on. We were thinking NASCAR would be calling us any minute we were just so darn good. Then we looked at the time and saw an hour had passed since we pulled over and decided they may not need us after all.

We packed up our tools, jumped back in the truck and took off. The way I had it figured, we were only going to be a little late getting to our destination, so all was well. We were back on track! We felt so empowered. We had just changed a tire on the interstate. In the dark. By ourselves!

Jessica called Dad back to thank him for his help and prayers. He was pretty excited that we were able to change the tire. Then I called Will to tell him about our adventure. I was in the middle of gloating about how awesome we were at changing the tire when I heard the same exact sound again coming from the left rear tire. 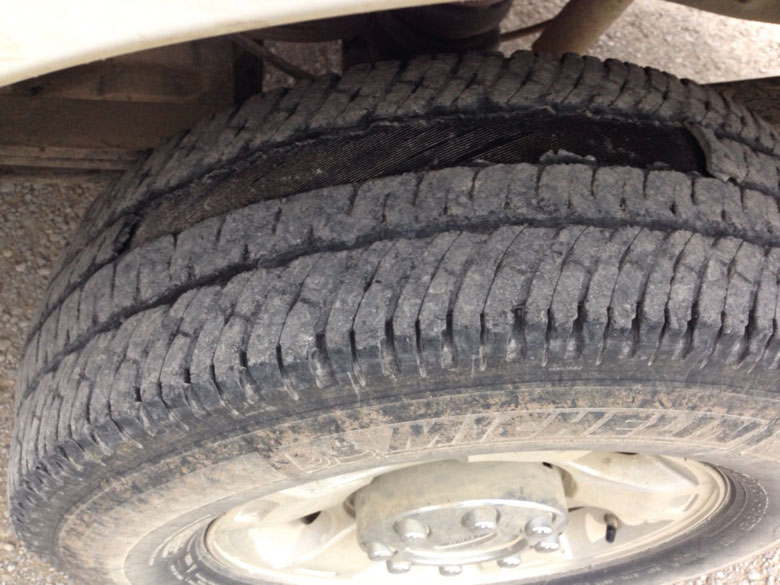 You have GOT to be kidding me! Nope. There it was again. Jessica and I looked at each other with horror on our faces. So we pulled off the interstate yet again. Only this time, the exit was right next to a town so we drove to the little gas station and talked with the local coffee drinkers. They knew a tire shop that would come fix our tire, but they didn’t open till 8 so we would have to wait a while.

Hmmm. That put us even later at getting to our scanning place and I thought we were going to be pushing it to get 275 head run through even if we started at 8. The way it was looking now, we were going to get there at about 10:30 or 11:00 and I just didn’t see any way to get all the cattle scanned.

So I called the breeder and told him what was going on. I was half hoping he would just say not to worry about it and we could reschedule for next week. But no, this was the only day that all the bulls would fit in the age window and he would really like to go ahead and do it. “Okay,” I said, “We’ll get there as quick as we can.”

So…to make a long story not quite as long, Will drove down and changed trucks with us. We took his truck the rest of the way and got set up to scan by about 11:00. 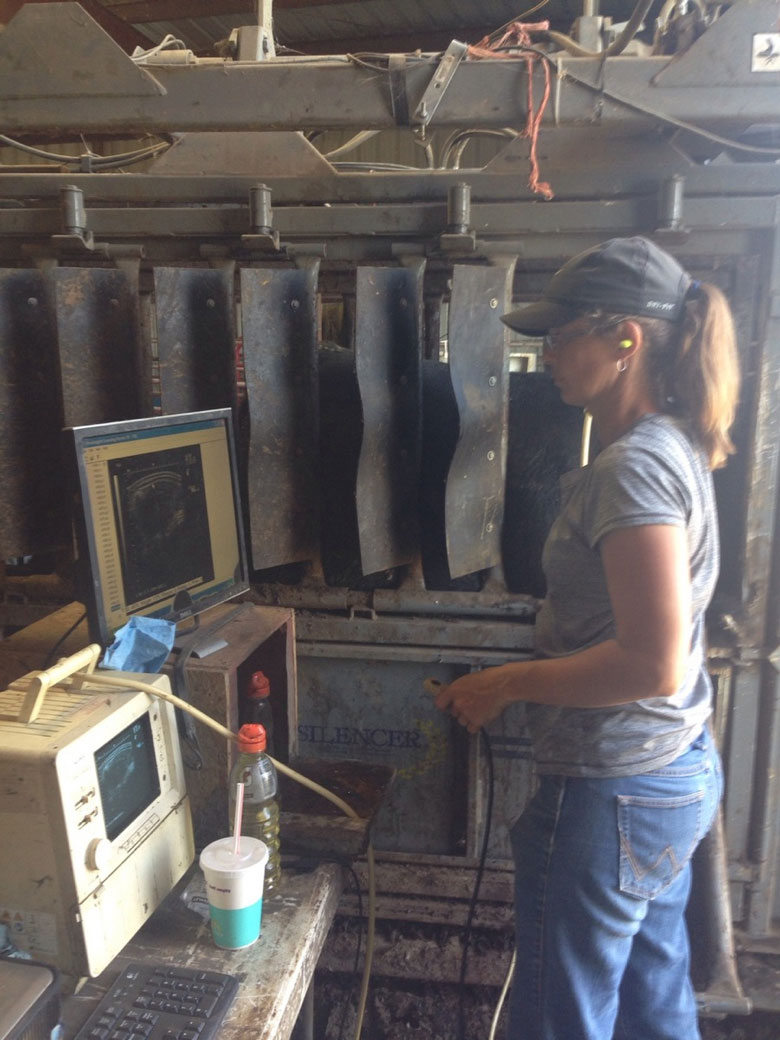 We started running cattle through at 11:10 and we were done by 4:40. Never in all my scanning career have I scanned that many head in that amount of time. We were flying. The guys bringing cattle to us were awesome. It was a hot day and I know they were tired, but they did an amazing job. They kept cattle to us all day long.

We were packed up and headed home by 5:00. Never in my wildest dreams did I think we would be home before midnight, but yet again, God was watching out for us.

The trip back was quite uneventful. (Which we were very thankful for.) And looking back on the day, I am very thankful Jessica was with me. She was just so calm and helpful throughout the whole day, I don’t know what I would have done without her. Plus, we sure made a memory!