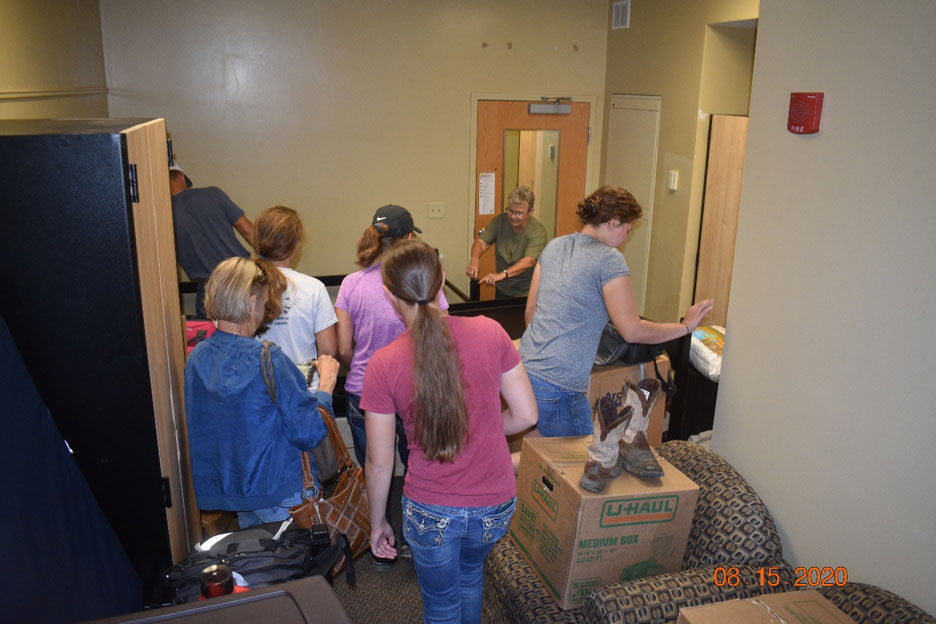 Well, we sent two more high school graduates off to college this year.  Although as Ashtyn pointed out nobody had quite the entourage as I did…

This picture was from last year when everyone moved me into the dorms.  There were two more people who did not make it in the pictures.  We barely fit in my dorm room!  Ashtyn and Rhett weren’t quite as lucky this year.

I guess part of it has to do with the fact that I was the first grandkid/cousin to go.   However, when Rhett moved to college most everyone was sick… Matt and Rhett had joked for months before move that only Rhett, Matt, and Uncle Will should go, but they knew that would never fly with the girls.  Little did they know, their wish would come true.

Poor Aunt Bon was laid up in the house sick with absolutely zero energy.  The whole family, minus Abby who had been sick earlier, avoided Aunt Bon.  So, Uncle Will, Matt, Rhett, and Grandma Martha (Will’s mom) headed to K-State leaving the girls behind.  Everyone felt bad for Aunt Bon, but you know what?  I’m not so sure that it wasn’t a blessing in disguise.  I do believe she would have been a MESS the week before, the whole car ride there and back, and it would have continued the week after.   But because she was so sick she could barely process the whole thing.  Now there were still some tears, but I don’t think it was quite as dramatic as it could have been. 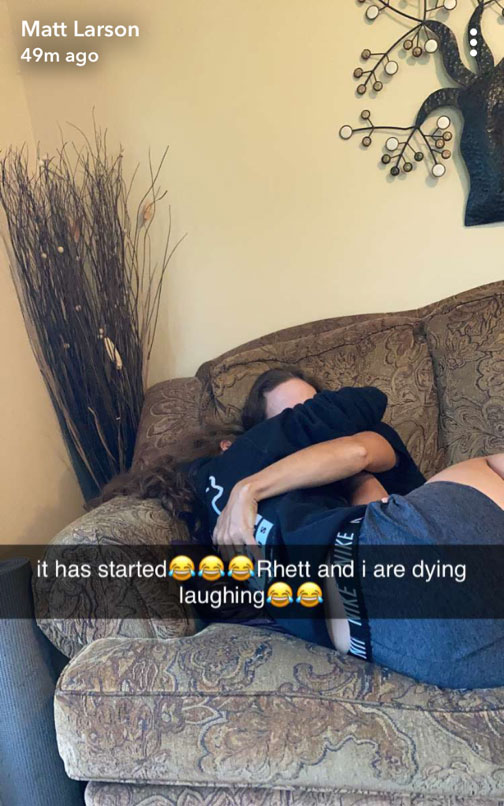 Like I said, being sick didn’t stop the tears from flowing, it just stopped a flood from occurring.  Aren’t boys just so helpful in these situations?!?!

And again, a classic case of boys:  Matt was supposed to take pictures of the whole moving in experience.  And while he did send some snapchats to the family group, he neglected to take any actual pictures on his phone.  As I wondered if that might be the case, I tried to save some pictures from snapchat. 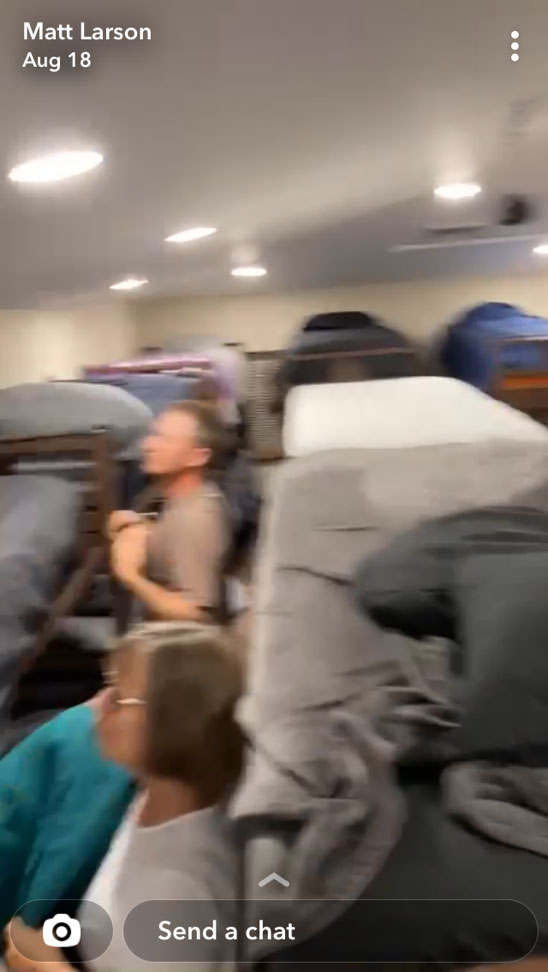 Yes, I know this picture is blurry, but it’s a screen shot of a video…   Here Uncle Will and Grandma Martha are helping make Rhett’s bed.

Oh, and if you didn’t know, Rhett joined the Farmhouse Fraternity. So, he’s living in the Fraternity house, and the bedrooms are like barracks.  There are roughly 40 boys in one room.  Which sounds kind of crazy, but thankfully I don’t think he has had too much trouble sleeping at night. 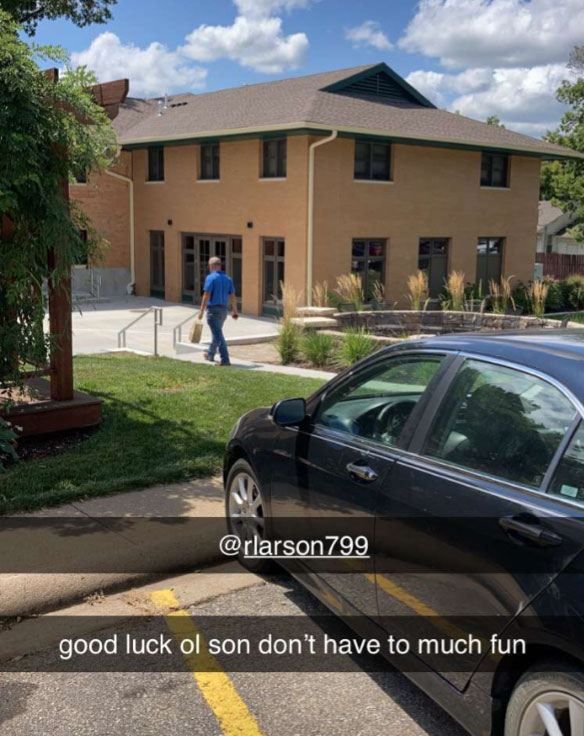 And here’s the last picture we saw.  I’ve heard a little from Rhett, and it sounds like classes are going well with not too much homework for the first week.  And the exciting thing is he’s coming home this weekend for Labor Day!  So, we’ll all get to quiz him about everything he hasn’t told us.    A sure way to get him to return more often! 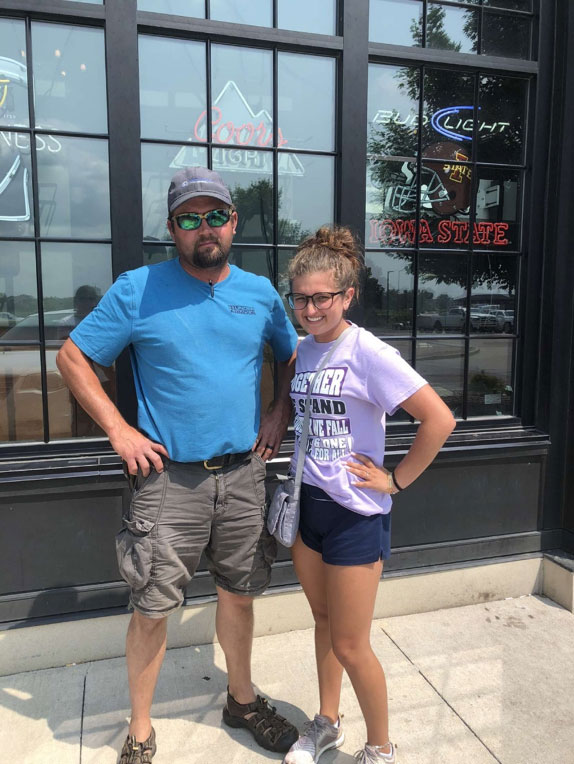 And this is the only picture I have of Ashtyn’s move in day.  Although she did send us an apartment tour video, and her place looks really nice!  She and her roommates have lots of room. I really think someone should caption this photo.  I don’t know what it would be, but this picture says a thousand words!

And Ashtyn is doing well at college too!  She enjoys her classes so far, and with a NICE grocery store not far away she has been cooking lots of meals.

Anywho, that’s the update from our new college students!

Talk to you later,
Lindsay