One day during Christmas break, these guys decided to have a fort-building competition.  They planned it for several days, and the day before the Hays family had to head back to Colorado, they put their plan into action.

Here’s how the competition went.  Each team (it was girls against boys) was given the same tools and the same amount of time to construct a fort and hunt for food.  Their list of tools included a hand saw, nippers, a hatchet, shovel, BB gun, half a package of jerky, and water.  (I got a kick out of the half a package of jerky…they weren’t too optimistic about their hunting skills.)  They entered the timber at 9:00 and had until 2:30 to complete their fort.

At 2:30, each team was to return to the house and relay directions to their fort to Grammy.  She then blindly labeled each set of directions and Beck and I headed out to judge the forts.

We had a rubric for judging, and points were awarded for: best camouflage, neatest, holds the most people, best protection from the elements, most authentic, most pounds of meat, most animals, punctuality, best sportsmanship, best presentation, most unique feature, most comfortable, and clearest directions to the fort. 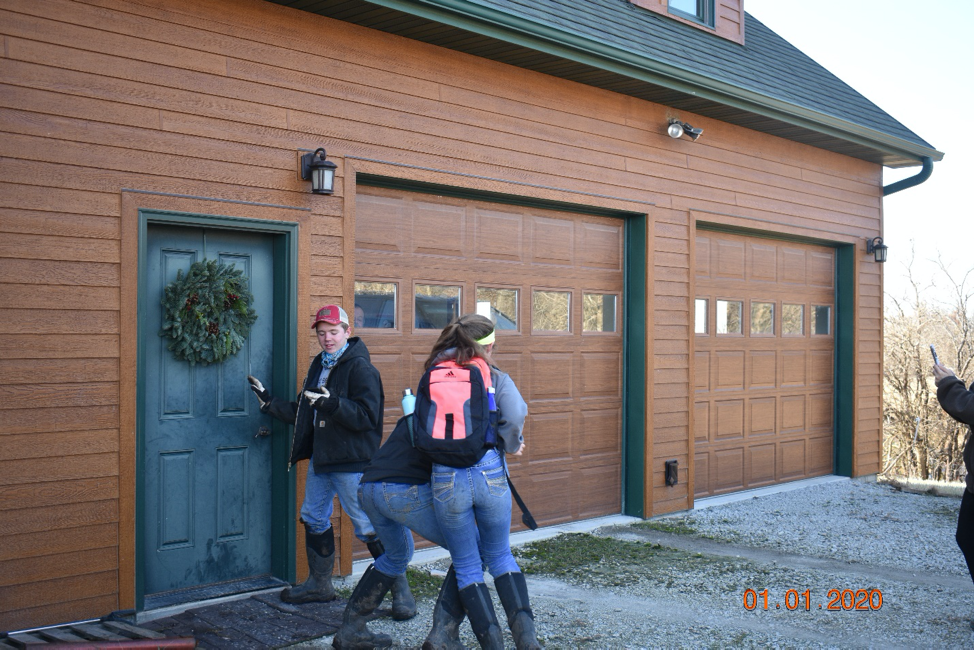 At 2:30, the race was on for the house.  The boys were awarded the points for punctuality…though it was a close call. 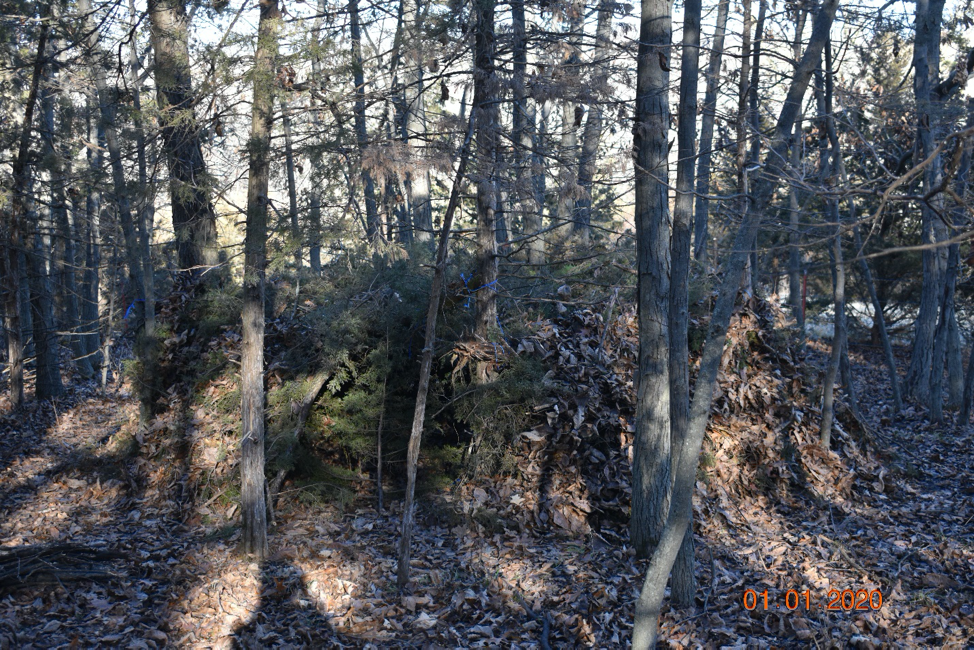 We arrived at the first fort and couldn’t believe our eyes.  It was spectacular! 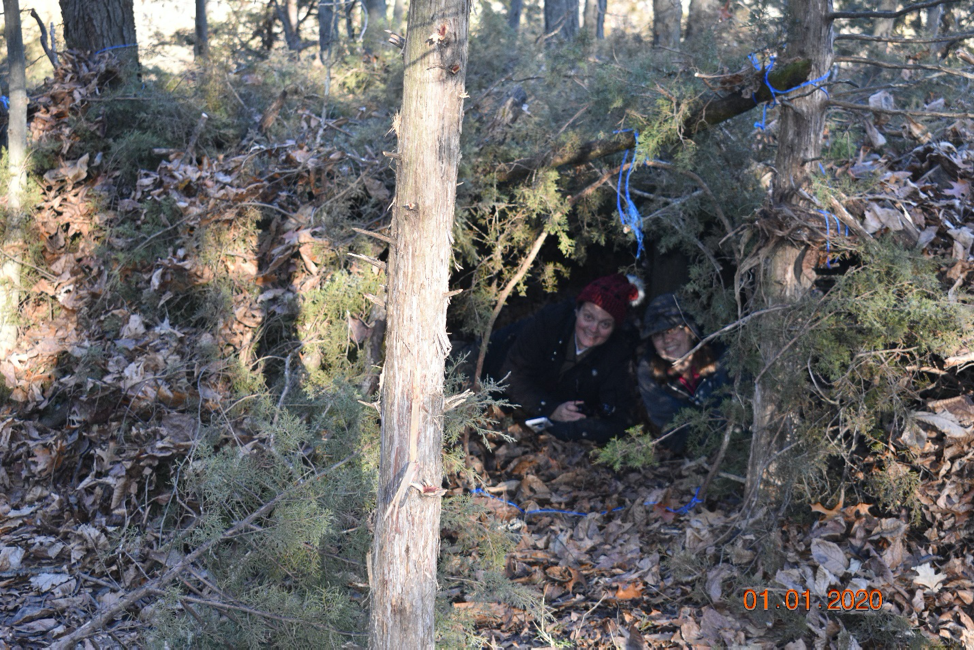 Now these pictures do not do it justice, because this fort was cool.  It was huge and could easily hold 20 people.  20 short people…which we Werners happen to be! Beck and I had our work cut out for us! 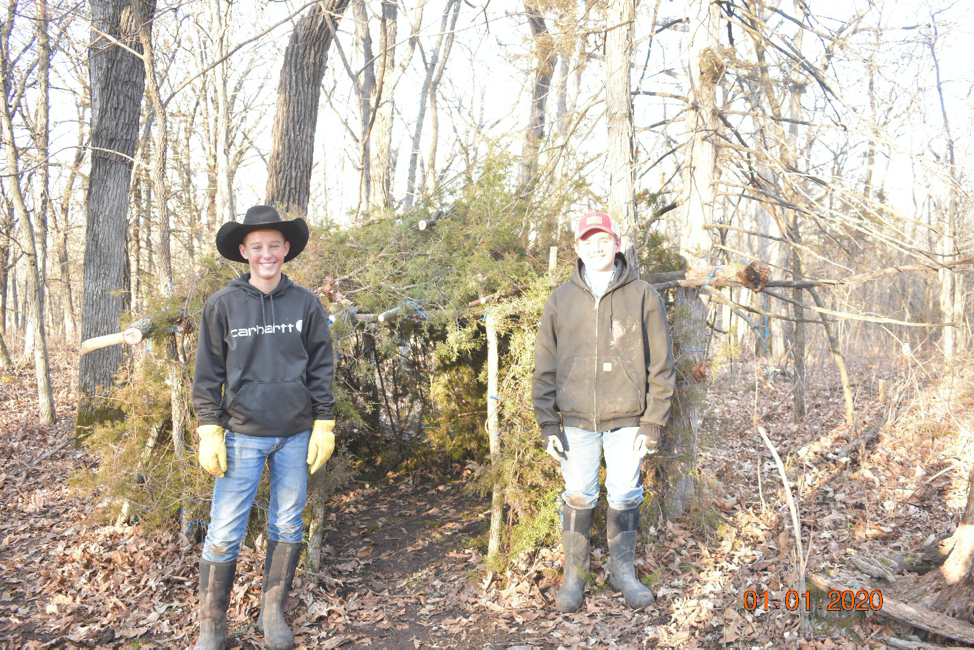 After our initial judging, the fort builders came out and presented their masterpieces to us.

These boys built this fort. This fort was very sturdily made and could comfortably hold three people. Here’s a view from the inside of the boys’ fort looking out.  See that homey star?  They found that in the timber.  And see the fire pit out the front door?  Pretty cool, huh?

It was evident the boys were focused on creating a solid structure that would protect them from the elements. The girls built this fort.  (They won the award for best camouflage as it’s hard to tell where the fort begins and the forest ends.) The girls’ fort was spacious and comfortable.  They blanketed the floor with leaves, and it made a perfect mattress.  This fort was built for socializing!

Wow.  Two spectacular, yet totally different, forts.  What were the judges to do?! Well, first we had to call the guys and have them come check them out.  (They were impressed.)

And then, we awarded the prize to…. Remember the portion of the judging that included the hunting aspect?  Well, the girls were the only team to harvest any game.  Not that it could have fed many of them, but it tipped the scales in favor of the girls and they were crowned champions. We had such a great time with this competition!  Beck and I decided we should offer this as a team-building retreat for large corporations as the kids had to work together, brainstorm a plan, communicate effectively, use time management, practice presentation skills, and enjoy the great outdoors.  I’m pretty sure Amazon will be knocking on our door any day now.  Lol.  I’ll keep you posted.

P.S.  The kids went out in the timber today after our snow and ice and were happy to report that the forts were still standing.