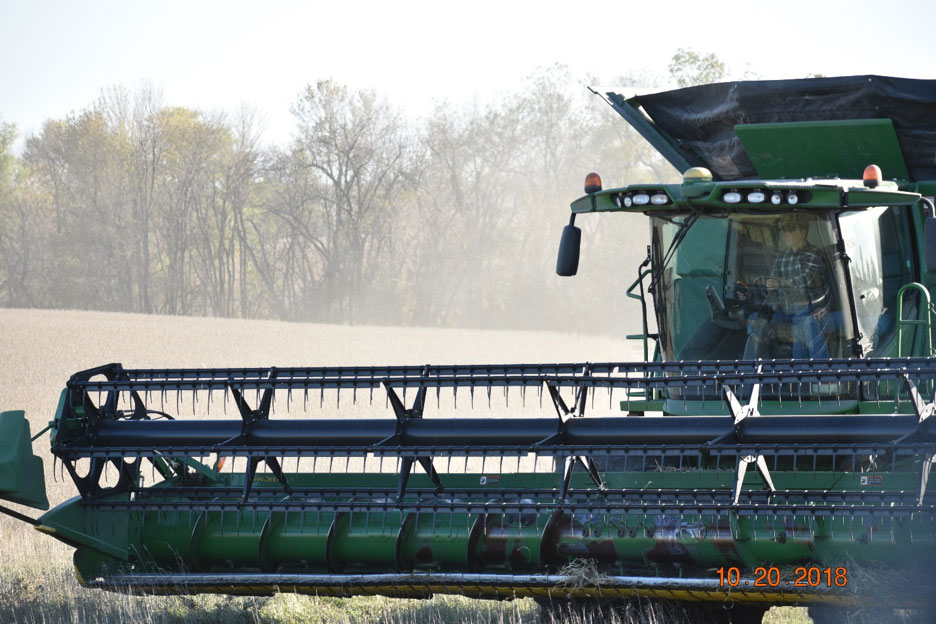 I got to ride in the combine with Will this weekend.  It was so much fun!  (P.S.  That is actually Rhett driving. I forgot to take a picture of Will.  Oops!) 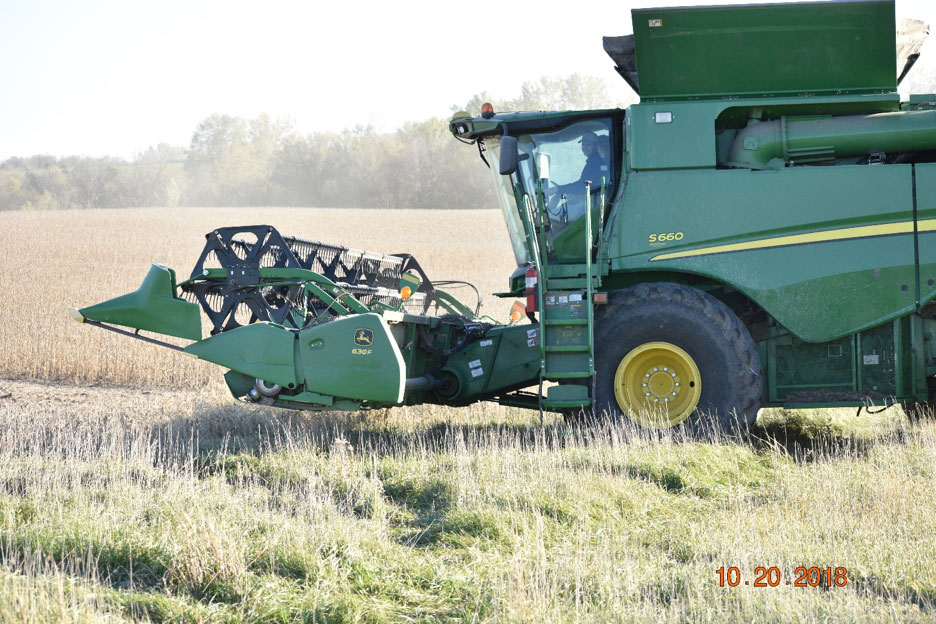 Oh wait!  There he is.  Oh never mind.  He’s riding in the buddy seat.  Hard to tell at this angle.

Anyway…I was so excited to get to ride in the combine because we just traded combines and this one has auto steer.  And a refrigerator.  Yes, that’s right, a refrigerator.  I honestly don’t know which one I was more excited about.

But, I really wanted to see this auto steer in action.  I’d read about it for the past several years in farm magazines and what not.  I was pretty sure I had a rough idea how it worked.  I was pretty sure all Will had to do every morning was fire up the ole jalopy and then sit back while the machine did the work.  That’s why I was looking forward to riding with him.  I thought we could kick back and catch up on things.  You know, visit.  And maybe take a nap.  Although, I’d seen pictures of where one farmer did that, and the combine drove straight into a pond.  Not good.  Not good at all.  And this field has a pond in it, so I had basically scratched that off my list.  So maybe we could kick back and sip on a nice, cold soda from our refrigerator!  Yes.  That’s it.

So I asked Will to take a few pictures of the auto steer monitor so I could show you.  (Because, of course, I forgot to when I was riding with him.  I was too busy kicking back sipping on my soda, remember;) 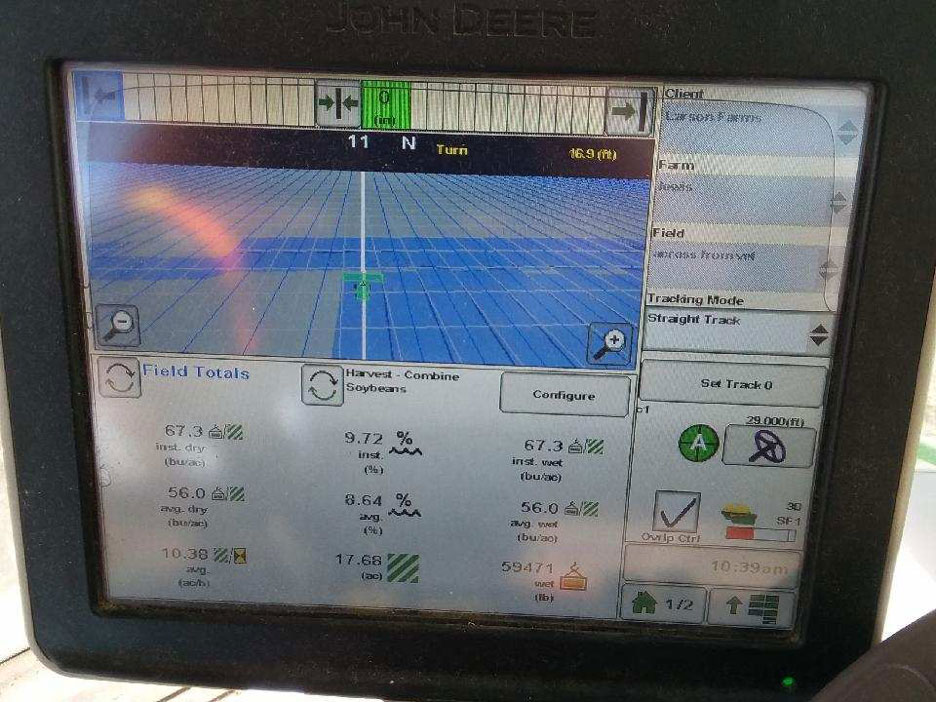 Here is the auto steer monitor. 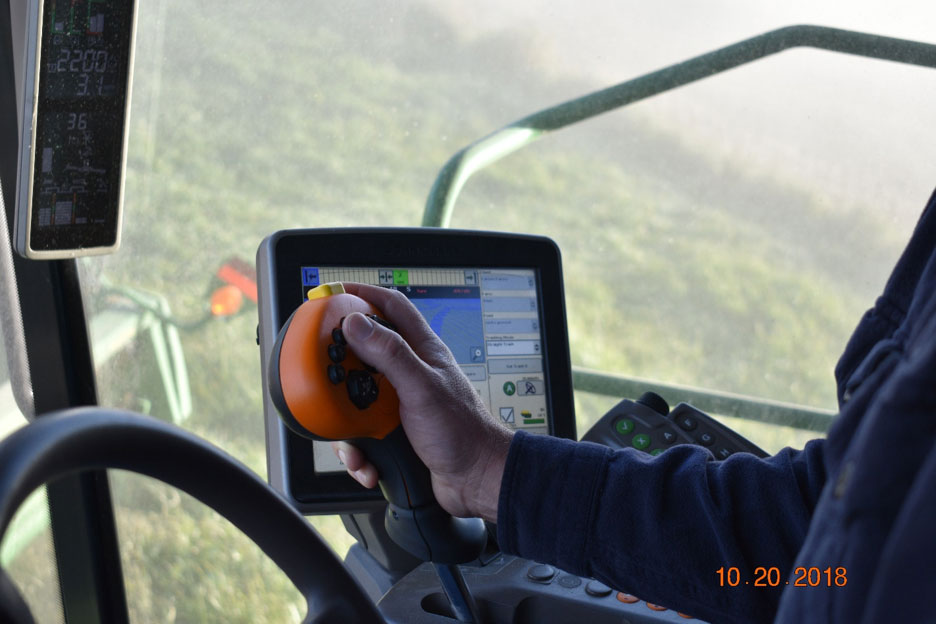 It sits just to the right of the steering wheel and orange control lever (I have no idea what that’s called.  You push it forward and the combine goes faster.  You pull it back and it slows down.  You push a button and the head raises up.  You push another button and it does down.  Push an arrow and the spout comes up.  Push something else and you start unloading the grain. It’s basically a giant video game controller and the whole goal is to keep the grain in the tank and not crash into anything.) 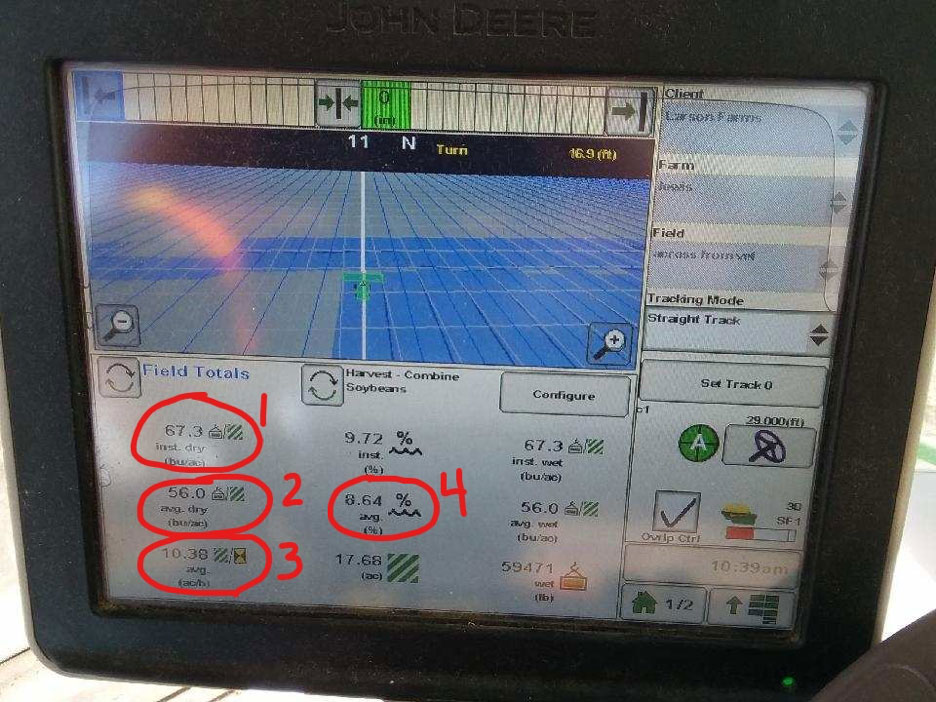 Anyway, back to the task at hand.  Here is the monitor.  Now, we’ve used this monitor in the past, but we just used it as a yield monitor.  And I loved watching it when it was just a yield monitor…as long as the yields were good.  Lol.

Plus, it can do a bunch more stuff, but I don’t understand it, so I won’t try to explain it. 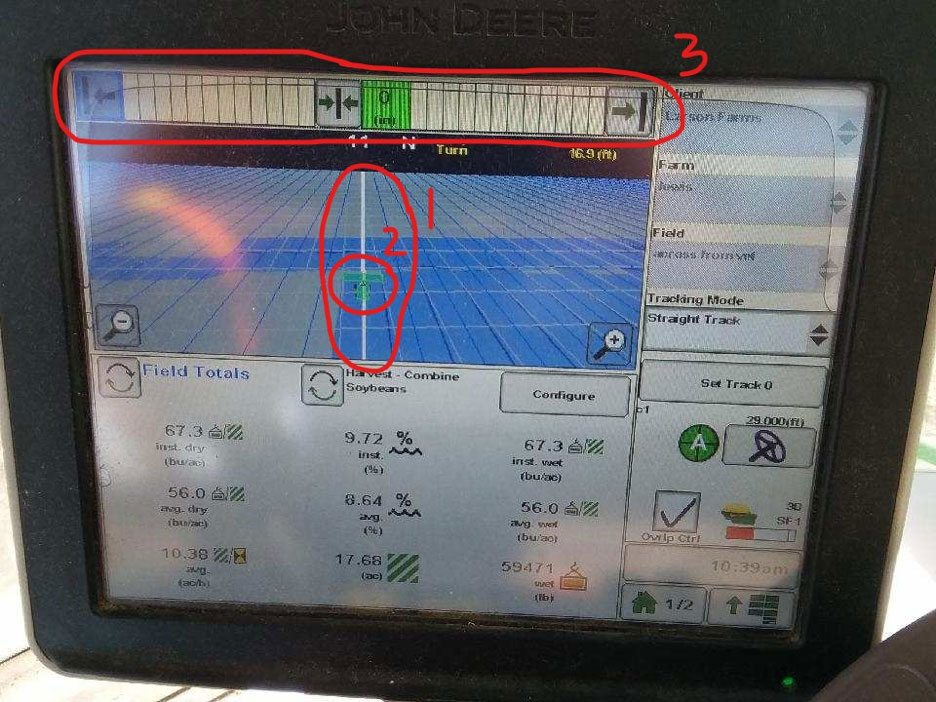 Now, what I thought was really cool, was the top half of the monitor.  This is the auto steer portion.  And here’s what I’ve learned so far.  See that bright white line circled in #1?  That’s the GPS line.  The combine stays centered on that line.  See that little green thing circled in #2?  That’s the combine.  See the part of the screen that’s shaded blue?  That’s the part of the field that has been combined.  Once Will gets the combine turned around at the end of the row, the combine takes over steering the machine which allows Will to focus on all the other aspects of combining.

Then, when Will gets to the end of the row, he turns the machine around, gets it headed for the next pass, and the machine finds it’s guiding line and follows it through the field.  See #3?  That shows how far off the white line the machine is.  When we turned around at the end of the row, the bars would light up to show that you were not going straight anymore.  Then it would get lined out and just go straight down that line.  It was amazing. 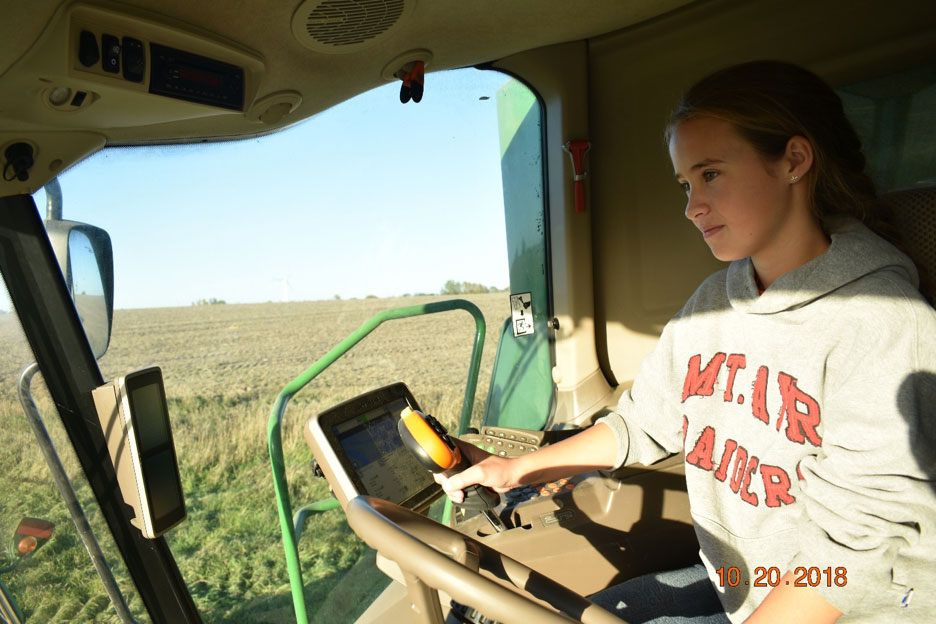 Abby got to try it out for a round or two.  She said it was pretty cool, but it felt weird not touching the wheel.  (The operator overrides the combine so if she touched the wheel she would take it off auto steer.) 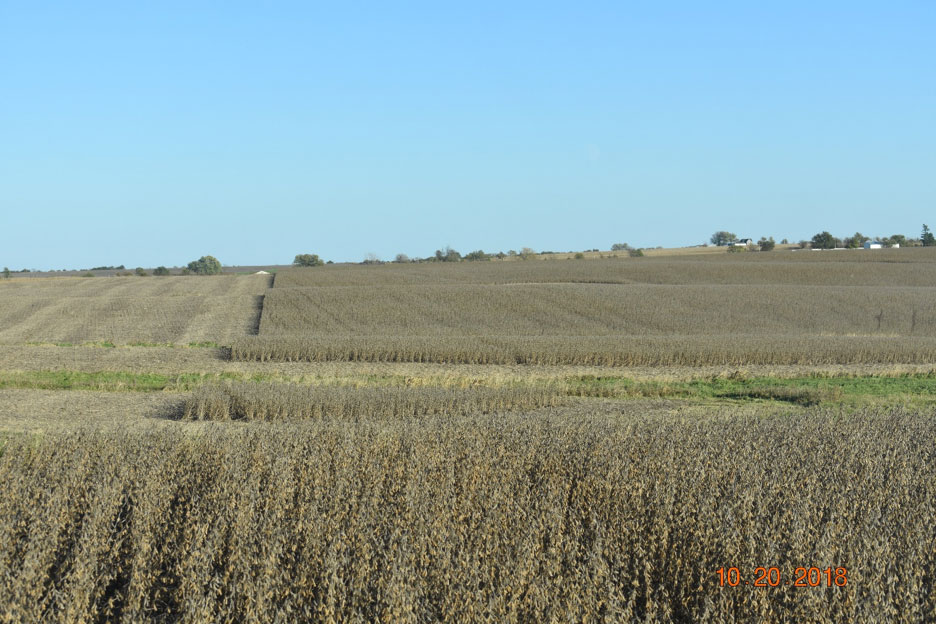 I couldn’t believe how perfectly straight the rows were.  It was like using the old wooden paper cutter at school.  You know, the one with the huge metal handle that you lifted up and carefully put your paper under before lowering the blade and slicing your sheet perfectly in two.  That’s what it reminds me of.

Now, as for the benefits and cost analysis, I’ll leave that discussion up to Will.  I just know that it’s pretty darn cool and I can’t believe how far farming has come in the short 15 years Will and I have farmed.

Hope you enjoyed the tour of the combine monitor.

(P.S.  I was also slightly disillusion with the refrigerator.  It apparently doesn’t fill itself with soda—now that would be something.  And it only runs while the machine is running.  But I guess since Will is in there about 18 hours a day, it sure beats a soggy ice bag in a lunch box.  Now if only Will could get his sweet wifey to fill it with healthy, nutritious snacks…)