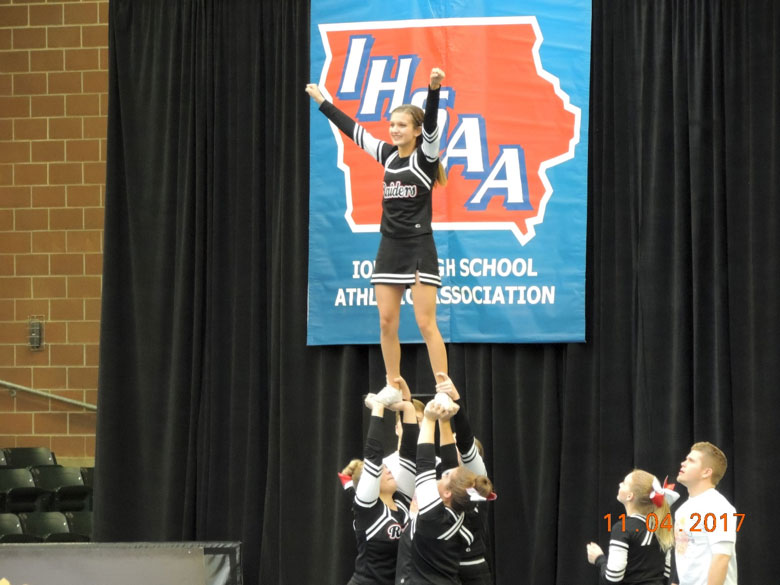 We had a big day in Des Moines Saturday. First, we went to watch Ashtyn perform in the cheerleading competition. She was involved in the “Timeout Cheer” division and the “Stunt” division. And we made it there just in time to watch both. And when I say, “Just in time” I mean if we had been two seconds later, we would have missed part of it.

It dawned on me about an hour from home that we were really going to have to hustle to make it in time to watch Ashtyn. And as they only perform for a minute, I knew if we were even a little late, we would miss it. So I breezed on down the interstate, hit all the right exits, said a prayer, and pulled into the State Fairgrounds on two wheels (not really.)

Now, it was a race against time to find a parking space. I drove by the first available spot as it was WWAAAYYYY too far away. Then, miraculously, I saw one up ahead. I wheeled into that thing like a freight train on wheels. I soon realized, however, that we were too big, and the parking place was too small. Seconds were ticking away. CRAP! I made an eleven-point turn out of the too-small parking place and headed far, far in the other direction. I found a big, beautiful, bare parking place about a quarter mile away. Perfect. Never mind the fact that this parking space was farther away from the original one I drove by. This time, I did wheel skillfully into the slot. Then, I forced down all my feelings of potential embarrassment and sprinted as fast as I could to the door. And I must really have been trucking because my boys could not keep up. And I’m sure it was not due to the fact that they did not want to be seen with the crazy lady racing across the parking lot.

Anyway, I got to the ticket booth and shelled out an exorbitant amount of cash to spectate a one-minute event and burst through the door just as our girls were taking the floor. I really wanted to bend at the waist and huff and puff as if I’d just run a marathon, but then I would have missed the cheer and that really would have ticked me off after all I had gone through to get there.

But the girls did AWESOME! I was so proud. You could tell they had worked really hard on the routine and in my eyes, they were flawless. And guess what, they won! They were awarded Class 2A State Cheer Champs for the Timeout Division! YEAH!

After the timeout cheer, we also stayed and watched the stunt division and I would highly recommend this event to anyone. The girls were amazing. It was fun to watch team after team perform all sorts of different stunts. And our sweet Ashy just happens to be a “flyer” so she was one of the gals that got tossed up into the air and then dropped so suddenly you would think she was going to crash into the floor, but her skillful teammates safely landed her. It was so fun to watch.

We had a great time. And when we were done there, we hurried to the other side of town to meet up with the Larson cousins so we could celebrate the November birthdays. That was so much fun too, but I’ll have to tell you about that tomorrow.