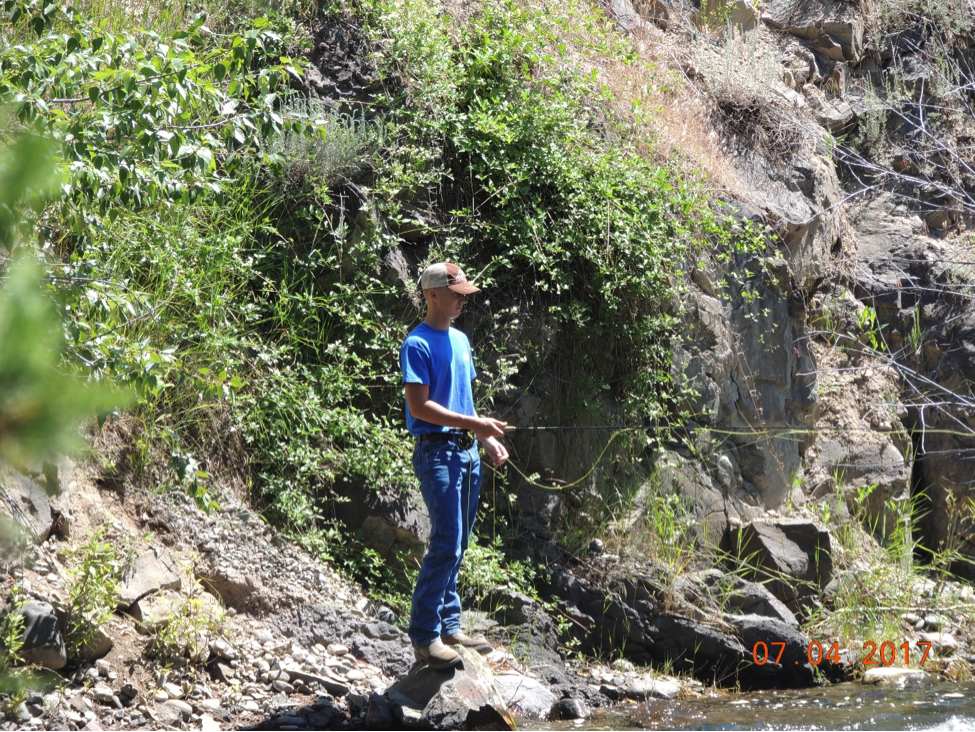 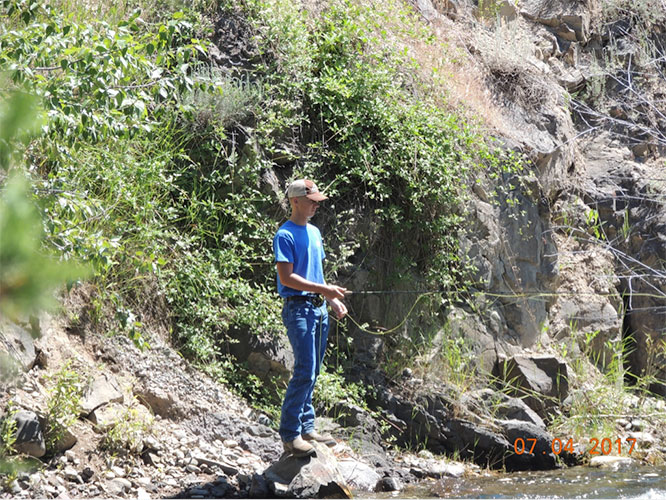 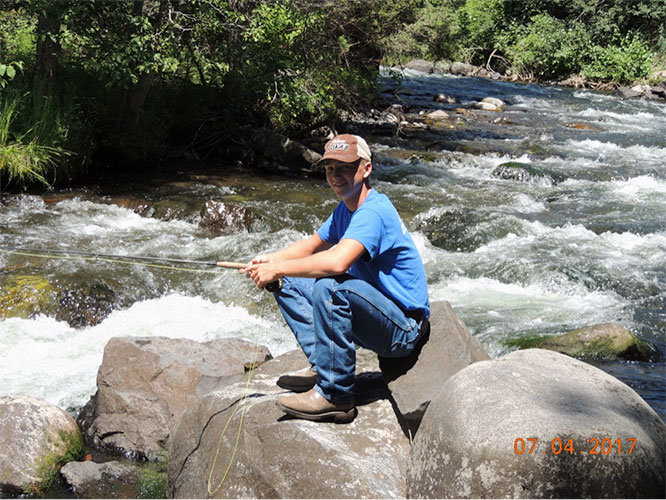 Rhett was pretty excited about our cabin in the mountains for several reasons. One of which was that it was located just off the Yellowstone River. And unbeknownst to us, the Yellowstone River is the fly fishing capital of the world. And Rhett, being an avid fisherman, thought that was perfect.

Now, I’d like to show you a picture of all the beautiful trout we caught, but unfortunately, we didn’t actually catch any. As in not even a nibble. But that didn’t deter us. It was fun just the same. 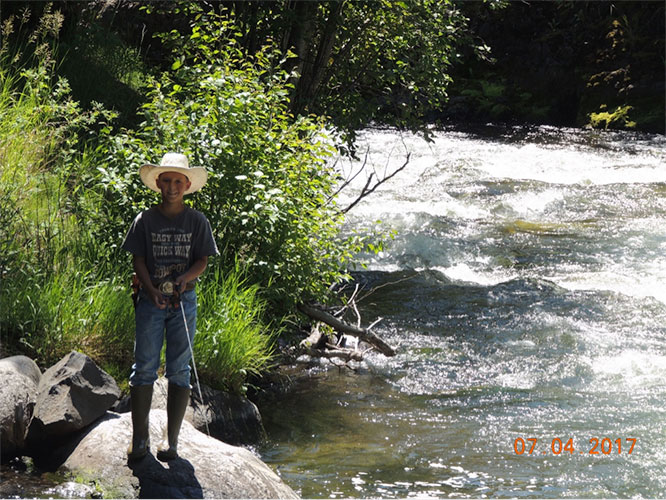 When Matt planned the trip to Montana, I don’t think he factored in the fact that we would spend much time fishing. But he brought along his mud boots just in case and had a fun time wading out in the water. He did go out too far once and water flooded over the top of his boots. Funny how that seems to happen to Matt.

After our morning of fishing, we ate at a little diner in town and our waitress asked if we were going to the Livingston Rodeo that night. We told her we were planning on it and she asked if we had tickets. No, we did not have tickets. Would that be a problem?

Well, she didn’t want to rain on our parade, but they often times sold out.

Crap. I had not factored that in. So I hustled outside to the flyer advertising the rodeo and called the ticket line. They were sold out. Bummer.

So I asked if there was a chance of getting any tickets if we just showed up. She hesitated to say it, but there were sometimes people who scalped the tickets just outside the rodeo grounds.

“Yes, if they don’t charge you more than what they paid for them.”

Well it was worth a shot. We didn’t have anything else to do that night anyway.

When we got to the rodeo grounds, people were flooding in. I mean flooding….There were people everywhere. And they had all planned ahead and purchased their tickets beforehand.

I went up to the ticket counter to see if on the off chance they miraculously had any tickets available. No, they did not. But if I wanted to stand in that grassy area over there and take my chances, I sure could.

There were about 6 or 8 people who had, like us, not purchased tickets in advance. We were in the definite minority as there were thousands of people flowing in who obviously had tickets. It was actually a little embarrassing standing there as everyone else walked past. In fact, Rhett was ready to call it a day and just head back to our cabin.

But we convinced him to wait just a bit longer, and then I’ll be darned if this gentleman didn’t point at Will and motion him over. He had three extra tickets he would sell. Bingo! At least a few of us would get in!

Then, about five minutes later, this kind gentleman saw Matt and Abby, walked over to them, and handed them two tickets…free of charge. We were in!! 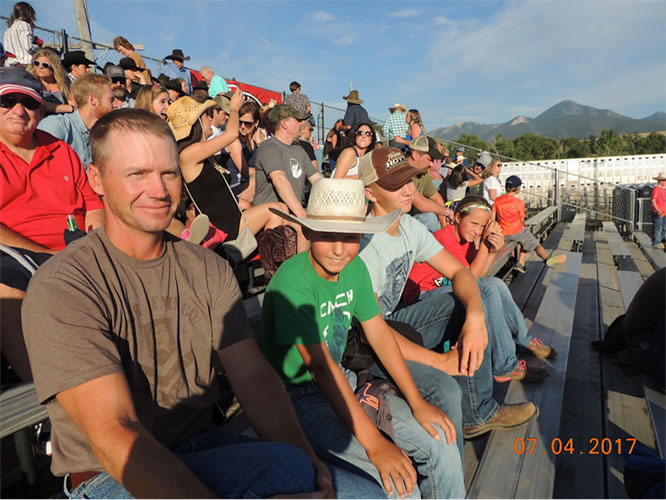 And what a great time we had. The rodeo may have been the highlight of the trip for Matt. 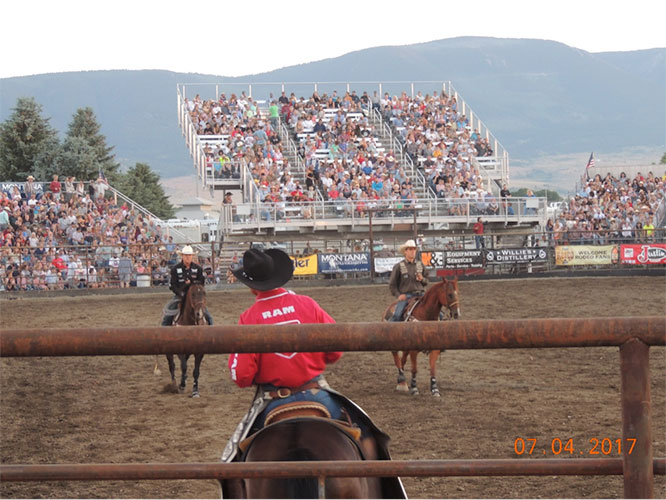 We got to see Trevor Brazile and Patrick Smith in the team roping. Along with several other top cowboys whom we like to think we have a personal connection with so we call them by their first names. Tuff was there. So was Tyson. And of course Trevor.

We had a great time. The fireworks show after the rodeo was spectacular. I’m so thankful we got in!