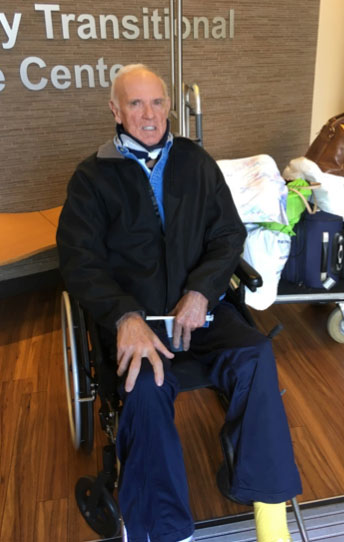 For those of you who haven’t heard, Papa Hays my dad’s dad (Craig’s dad) had a pretty bad tractor accident 4 weeks ago (the night before we came home from Aunt Carolyn’s). As far as we can tell he was jump starting the tractor and standing in front of the back tire.  It was still in gear and it ran over him when it started. Mom (Becky) went out to look for him after no one could get a hold of him for a while to see if he was having any trouble. We are guessing that he laid there for 3 hours. He was life flighted to KU Medical Center in Kansas City and was in ICU for 2 weeks.

Papa Hays broke his pelvis, 22 out of 24 ribs, 5 vertebrae in his spine, and both shoulder blades. One lung was deflated and the other one was partially deflated. I think that is it. The doctors gave us a paper of all of his broken bones and it practically filled the paper! Grandma came up (from Mississippi) the night of the accident. He doesn’t remember the accident or ICU, but that’s probably for the best.   He was in rehab for 2 weeks. Both Papa and Grandma came home on Monday to stay with us for a while.

He is in (and will be in) a wheel chair for at least 4 more weeks. They put a pin in his pelvis and they do not want any weight on the left leg. He can hop around with his walker on his right leg. His neck is also in a collar so he can’t move it and disrupt his broken vertebrae. He has a long way to go, but has come so far!

He wasn’t able to swallow for 3 weeks. As you could imagine that was rough. Everything that he swallowed would go to his lungs. The flap at the back of his throat wasn’t switching over. He is now able to swallow which was a BIG accomplishment. His drinks have to be thickened and his food needs to be soft and creamy. We have all been able to eat the same thing at home though. He is happy to be off of hospital food.

He is in good spirits. He knows he has a long road ahead of him, but he hasn’t let that slow him down, yet.

We have gotten lots of cards, and have had some visitors. There have been people praying for him clear across the country from Alasksa, to Flordia, Pennsilvania to Nevada. It’s crazy how many people know about it.

Thank you for all the prayers and well-wishes in forms of cards and visits!