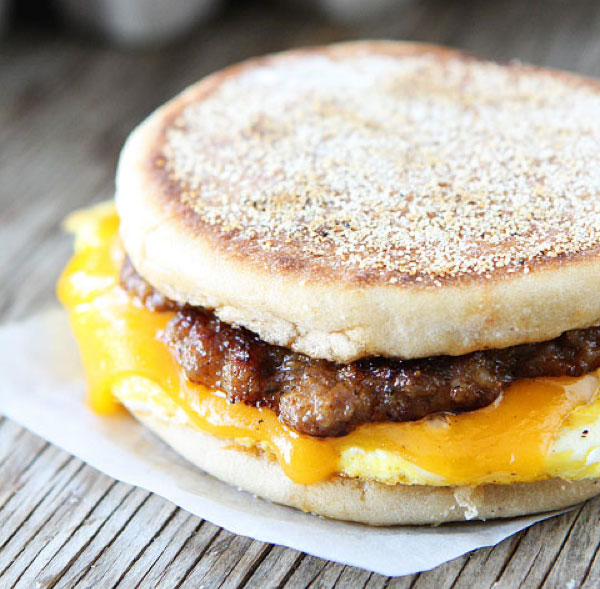 Okay, I’m going to change things up a little here this morning. I’m going to list some breakfast ideas! Breakfast is probably my favorite meal to prepare. First of all, it’s usually the easiest and quickest meal of the day. Secondly, we are almost always all home to eat it. We get to sit down at the table and figure out what everyone has going on for the day. We can coordinate schedules and get a plan. I love plans. And finally, a good breakfast just jump starts your day. So below are some of our favorites.

Sausage, Egg, and Cheese
Whenever I ask Will what sounds good for breakfast, his reply is usually Freddy Egg McMuffins. This is our version of McDonald’s Egg McMuffin and Freddy’s thin patties. To make these, toast an English muffin, fry an egg (we like ours over-easy), melt a slice of cheese on top of the egg as it’s cooking, and assemble on the English muffin.

For years, that was how I made them. Then, we were introduced to Freddy burgers and decided we should try frying a thin sausage patty and put that on top of our egg. Oh my. What a lovely addition!

Now the timing of all this is the trickiest part as you want the English muffin, the egg, and the sausage to be done at the same time. It’s taken a little practice, but usually by the fifth one (which happens to be mine☺) I’ve got it down.

Now, Will has always liked his with crunchy peanut butter and jelly spread on the English muffin as well. I thought that was the weirdest combination, but I tried it once and now that is how I like mine as well. Who knew?!

So the next time you need a protein-loaded breakfast, give this a try. 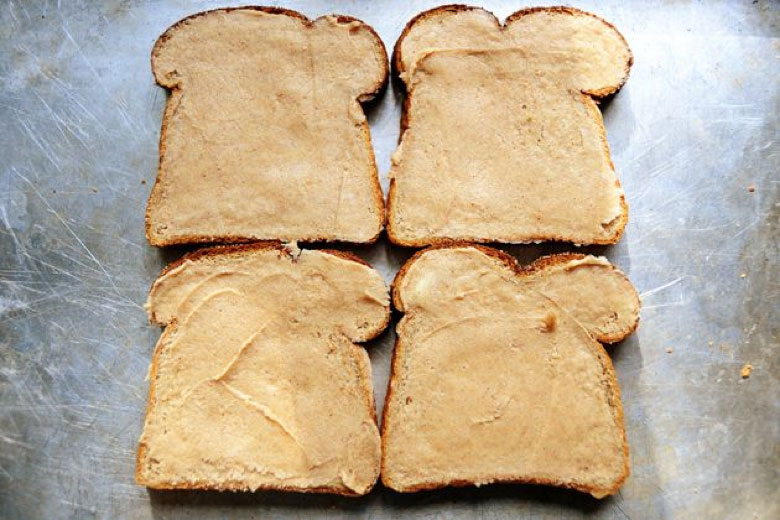 Pioneer Woman Cinnamon Toast
This is delicious. It’s a Pioneer Woman recipe that you can find on her website if you search for Cinnamon Toast the Right Way and it is sublime. You just take a stick of butter, ½ cup sugar (I use brown sugar), 1 ½ teaspoons cinnamon, and 1 teaspoon vanilla. Use a rubber spatula to mix this all together and then spread on 8 pieces of toast. I love it the best on potato bread, but you can put in on whatever type of bread you like. (Actually, I love it the best licking it right off the spatula, but I probably shouldn’t admit that.)

Bake it in the oven at 350 for about 10 minutes. When it is almost done, crank the heat up to broiling and let it broil for the last minute or so. But keep an eye on it so it doesn’t burn. It will be bubbly and sizzle-y and scrumptious.

This is making me hungry. I think we will have this for breakfast tomorrow.

And just a side note, I bake mine on a cooling rack because some members of my family didn’t like that the bottom got a little soggy. What’s wrong with a soggy bottom I ask ya?! Anyway, when I started baking mine on the cooling rack, it allowed the entire piece of toast to be toasty. 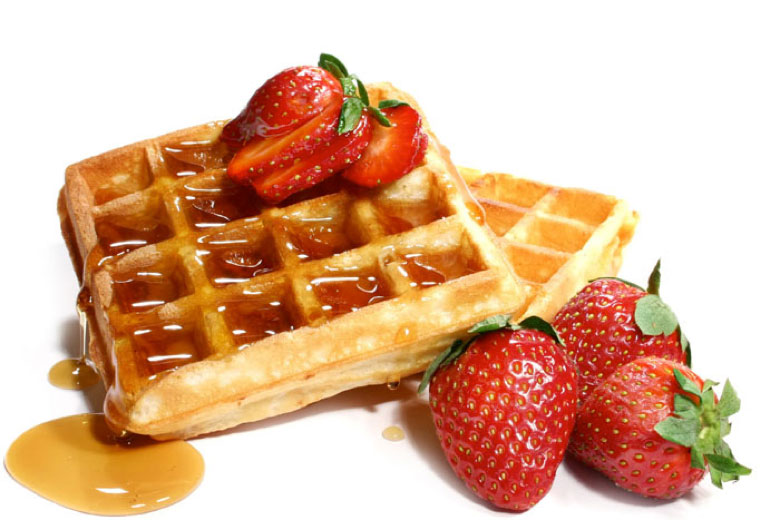 Waffles
There is a bitter debate in our family about which is better: pancakes or waffles. So I have to try to alternate making each one to avoid catastrophe. Because if it was up to me, I’d just make pancakes. But I must admit that I do like waffles, too. They just take a little longer to make.

So whatever the preference is in your family, make some waffles or pancakes today! Or in the morning, whichever you prefer. The choice is all yours! Or you could do like me and just use the same batter for both. *Gasp* I know that is something professional chefs would never recommend, but it sure keeps the peace. 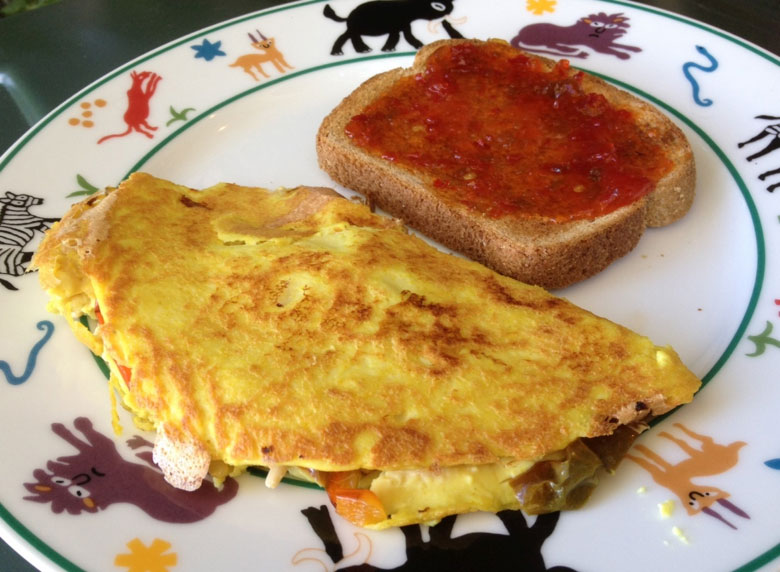 Omelets
I have just recently started making omelets. They used to terrify me. But then I got a wonderful non-stick pan, and the world has not been the same. The first time I made them, I whisked each person’s egg individually and then put it in the pan. I was complaining about how long it was taking me to whisk each egg when Rhett suggested I just whisk all the eggs at one time and then just pour the allotted amount in the pan. That child. He’s a thinker!

So now I find omelets quite simple to make. To begin, I’ll dice up a bit of onion and bell pepper. I’ll get those cooking in one skillet while I get the eggs ready. I just whisk 6 eggs for my family of five and add a thin layer of egg to the pan. Then I’ll gently push the edges of the egg towards the center for about an inch or two and let the uncooked egg fill in the open area. Then I’ll salt and pepper the egg, add cheese, ham, salsa, onions, peppers, and whatever else sounds good to one half of the egg. Then I’ll flip the over half of the egg on top of the fillings and voila, an omelet. It should slide easily out of your pan onto the plate and then you’re ready for the next one. 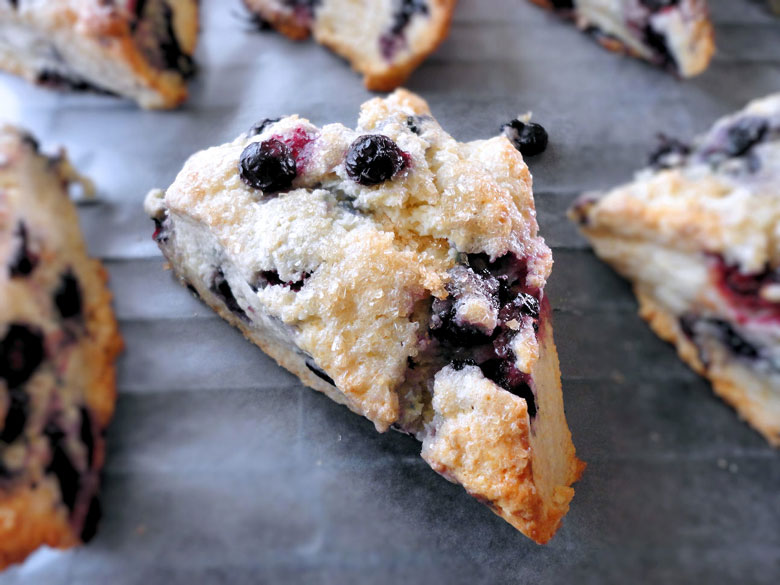 Scones
This is usually a Sunday morning breakfast as it takes a little longer than the 20 minutes I usually allow myself for school-day breakfasts. But boy are these good! And there are so many variations that I’ll just let you google a recipe that trips your fancy, but I will recommend finding a recipe with fruit mixed in. Those are my favorite. And I like to put icing on the top, but you can go either way on that, too. The possibly are endless!

I hope these recipes gave you some ideas for breakfast this week!