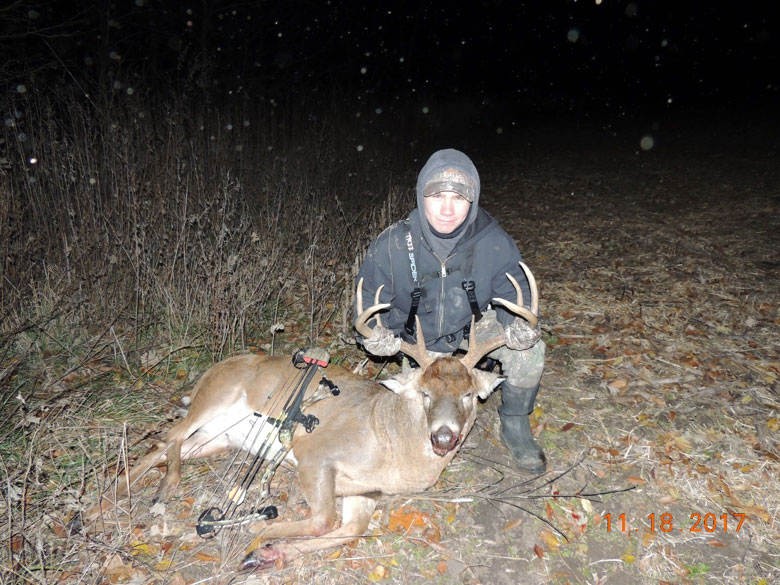 Thanksgiving Break was a dream come true for my nephew and my son. First, my nephew Cody stayed with us one weekend (and okay, maybe it wasn’t actually over Thanksgiving Break after I look at the date on the picture…oops.) But anyway, Cody and Rhett went out bow hunting and just before dark we got the call that Cody had shot a deer. Well, unbeknownst to me until earlier this hunting season, you do not go out searching for your deer immediately after you shoot it. You have to wait a bit.

So at the prescribed time, which was after dark, Cody, Rhett, Will, and I headed out in search of the deer. Now, I knew it was going to be cold out, so I went well prepared and warmly dressed. I’m a thinker you know. However, it did not occur to me that I would be traipsing around in the woods at night and may actually need a flashlight or some-such device. I mean, really, who would have guessed that?

As my other three tracking companions flicked their lights on the moment we left the truck, I realized, alas, I was the only numbskull who had given no forethought or planning to our adventure and for the next hour or so, I stumbled around aimlessly in the dark. Not really, but I would have to remind my cohorts that I had forgotten my flashlight and if one of them would kindly shine a light my way, I’d sure appreciate it. These guys were certainly glad to have me along. I was such an asset to the team.

So after tracking near and far and hither and yon, I decided we should just give up and try again in the daylight. I mean really, what were the odds of us finding the deer anyway? Slim to none? Of course, I kept those negative thoughts strictly in my head as I did not want to dampen the spirits of my sweet nephew or son.

So we trudged on. And I am glad we did because shortly thereafter, we found the deer.    And I don’t mean to brag or anything, but I was actually the one to spot the deer. I think it was because my eyes had become so accustomed to the darkness that the brief flash of an unusual object just out of range of my son’s flashlight caught my attention.

No reply. They must not have heard me. I refuse to think that perhaps they were actually ignoring me. That just wasn’t possible. I’d been so helpful thus far and I knew they valued my keen tracking ability. So I cleared my throat and spoke a little louder so they would be sure to hear.

This got one of my companions to shine his light right on the object and low and behold, it was the deer! Hallelujah! Now we could go home! I could snuggle up under a fuzzy blanket, sip some hot cocoa, and try to forget about my substandard tracking skills.

However, I was thrown another curveball, for once we found the deer, we then had to field dress it. Oh, joy.

But it was all worth it. Cody got a beautiful buck and he’ll soon have some yummy deer sausage and bologna to enjoy all winter. Plus, it really was pretty fun tracking the deer, despite my poor planning. 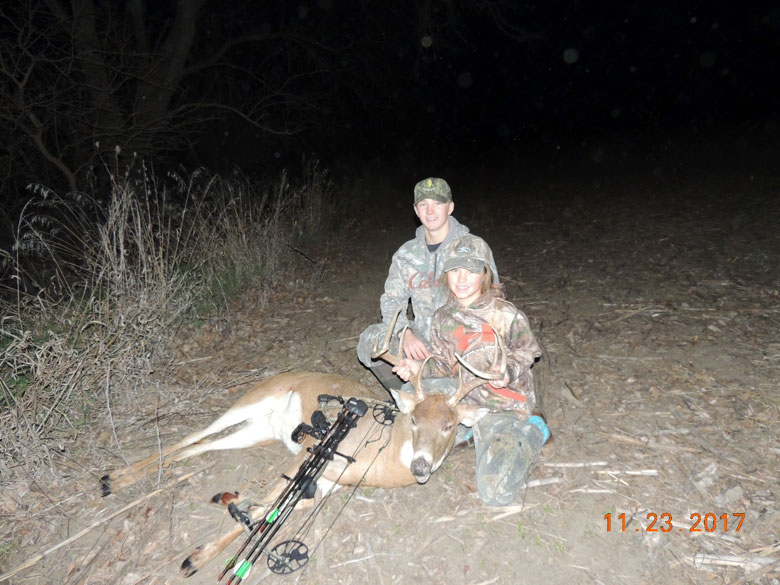 But wait! There’s another deer!

And this picture might lead you to believe Abby shot the deer, but that would be incorrect. Abby just brow-beat her brother into taking her along. And poor Rhett had no intention of taking her, but I convinced him it would be okay to take his sweet sister along for just a little bit. He finally agreed as long as Abby sat at the base of the tree and did not speak or move. Plus she had to put on scent killer because deer have a keen sense of smell. Or so I’m told.

Just as Abby’s bottom was numb and she was bored out of her mind, a deer came into view. Abby jumped up, shouted, “Hey, Rhett!” and pointed boldly at the deer. “Did you see him?” Abby asked as the deer leaped away.

Oh wait. Just kidding again. I should really not write a blog when I’m tired. I have all these funny little scenarios playing out in my mind, but they’re probably really not that funny once I write them down.

Anyway, the buck did come into view, but Abby sat perfectly still and Rhett drew back his bow and nailed it. The deer went down not ten yards away. Thank goodness! There was no tracking necessary on this deer!

And now we have a freezer full of deer meat which Aunt Heather and Rhett plan to make into deer sticks and jerky. I’ll let Heather tell you how that goes.