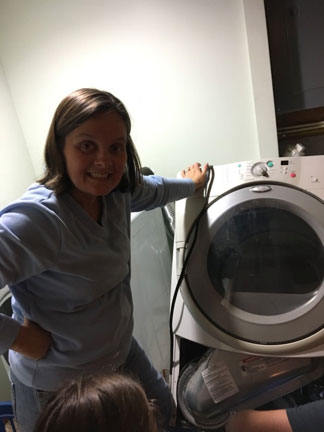 Here’s another thing to mention. Dad has had two wedding rings, and has lost both of them! A while after he lost the first one, Mom decided to get him a wedding ring for Christmas. Guess what??? He lost it again! It all happens around preg-check time. He takes his ring off to preg- check a cow. We don’t really know what happens to them. Does he have holes in his pockets? Or does it even make it to the pocket? Does it get lost in the washing machine or dryer??? The world may never know.

Ok. We had just gotten back from church and Mom decided that we should go look in the dryer for the ring. Mom, Jessica, and I went downstairs, and started pulling lint, and all sorts of coins out of the dryer. The laundry room is nice size, but just small enough that you had to squeeze behind the dryer, or step over people to get to the other side. Mom was behind the dryer and tipped it up and to try to shake some stuff down.

After a while Mom started pulling lint out, too. She took one handful from the dryer pipe. She looked down in her hand and she had a dead mouse in it! She screamed, as if she’s falling into a deep dark hole. This scream alerted Jessica and I that something was wrong, but we’ve heard her scream about mice before. This scream was definitely the worst. I hollered, “It’s just a mouse! It’s just a mouse!” So everyone around wouldn’t come running to see who was shot! J Then she starts hollering, “Get me out of here! I can’t get out of here!” The dryer was in the right position that she had to squeeze by it to get out. By this time Jessica and I were dying laughing! She ran upstairs where Dad and Cody are, and she’s hyperventilating (I’m not really kidding!) She finally went to the bathroom to wash her hands then told Dad how horrible it was. Jessica and I were trying to stop laughing; we’ve been laughing for 3 min. straight. It was quite hilarious. I will say that after the mouse was removed she went back down and looked a little more for the ring. We didn’t find the ring, but we had a very exciting night!

On a completely different story, Mom did kind of scare us last night. We had just gotten back from a concert that Ashtyn and I played in, and Dad had left for Colorado. Jessica, Cody and I were sitting in the living room watching TV, and folding laundry, while Mom was making popcorn. All of a sudden out of nowhere the doorbell rings I go “uggg” like someone just punched me in the gut. Jessica jumped out of her chair and ran to the kitchen. Cody got up to see who it was when he realized he didn’t have a shirt on. So I went to the door thinking the house is pretty much a mess. I looked out the window and there is a person standing right in front of the door, and the shocker is that it looks like Mom! She comes in laughing, wondering if she scared us! I guess she had given us a little payback, but I think the mouse was a lot funnier. Especially since it wasn’t planned.

Now you may be thinking why were we so scared of the doorbell ringing? No, we’re not outlaws hiding out in the house. It was already dark, we hadn’t seen anyone drive up the driveway, and Lilly (our dog) didn’t bark, (and you can most certainly count on her barking,).

There are some true stories, hopefully you’ll be able to start your day with a smile!