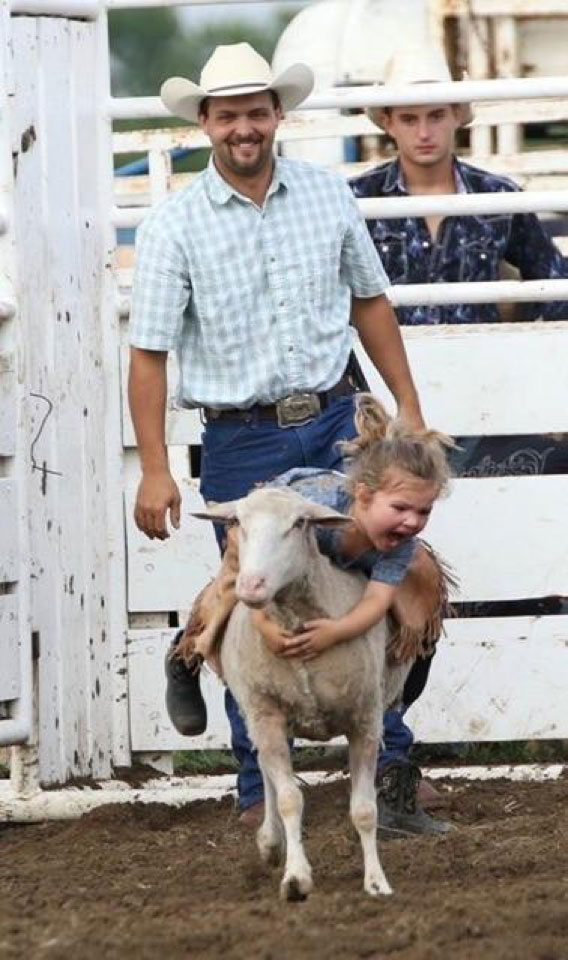 You may remember this picture from last year.  (Or you may not:)  But our sweet little Emma does.  She had a rather traumatic experience in the muttin’ bustin’ last year…in that once she got in the chute with her sheep, she decided she definitely did NOT want to ride it.  Her father, however, had different plans.

Well, fast forward a year and this little cowgirl was crowned the Muttin’ Bustin’ Champion at this year’s County Fair!  Now a good aunt would have had a current picture of her sweet niece-y in all her glory, but alas, I missed the whole stinkin’ ride.  I walked onto the rodeo grounds just as the announcer was stating her score.  Bummer.

I did get a first-hand account of her performance, however, and it was reported that her screams could be heard across the fairgrounds.  And that must have been exactly what the judge needed to hear to bump her into the winner’s circle.

Now you might think that Emma would have been elated with her victory.  I mean, she beat both of her big brothers for crying out loud.  But when I asked her if she had fun, she said, “No.  And I am not going to ride a sheep again.”  Ha!

I think she realized that her father was going to “let” her ride a sheep every year and that her only prayer of every getting out of the muttin’ bustin’ was to win the whole darn thing so that she could end her career at the top of her game.  So she did just that.