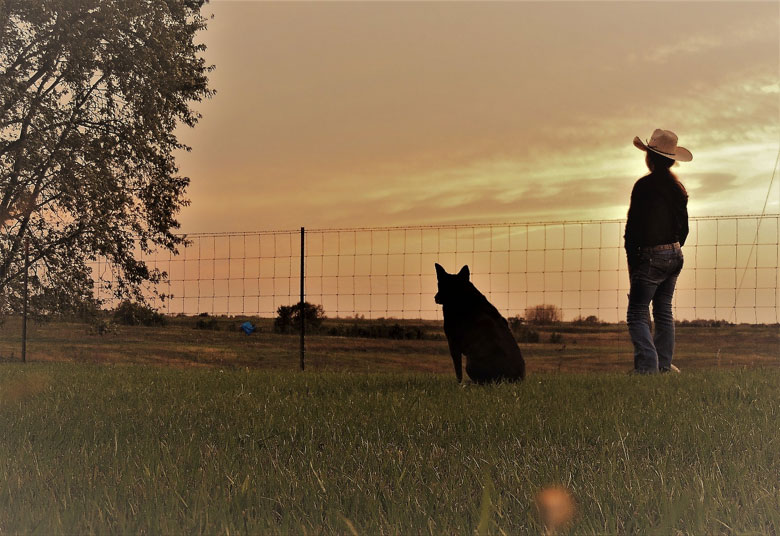 I wanted to post a picture of the deer my older son shot this week, but my camera is out in my truck and it is cold and windy outside. Plus, I was almost killed by a crazed maniac earlier this evening, so I decided just to stay in the warm confines of my home and look for another picture.

And I came across this one of my sweet daughter and our loyal dog. And the kicker…she took the picture herself. She set the timer on the camera and this is what she got. How come whenever I try something like that I cut my head off or have the camera out of focus? Anyway, I really like this picture and thought I’d share.

Oh. And you want to know how I was almost slayed by a wild brute this evening? Well, I’ll tell ya, but be prepared. It’s scary.

So I was just finishing making supper when I heard a strange noise outside the kitchen window.

“What was that?” I asked my two youngest children.

We listened intently for a moment and heard it again.

Now let me just remind you that it was dark outside. Pitch black. The wind was howling and we were alone in the house…or so we thought.

Being the brave person that I am, I told my son to see if anyone was in the basement. I was just training him for when he is older and he has to be the man of the house and check out the creepy noises. I was just being a loving mother who was teaching her son to be brave and strong and to protect the people he loves. I was not being a chicken.

“There’s no one there,” he said after peering down the stairs. “It’s probably just Kelly wagging her tail against the step.”

(Sorry, son, but I’m pretty sure that’s not going to cut it.)

“Oh. Okay,” I say, knowing full well that was not the noise I had heard. But I didn’t want to alarm the children that there was very likely a bad guy outside. Because, in my mind, on a dark and windy night, (or any night for that matter) there is always a bad guy outside. And he’s always waiting to jump out and attack me while I am walking from the garage to the house. Or the house to the garage. It doesn’t really matter where I am walking, in fact. If it is dark and I am alone; he’s out there. He’s always out there. Waiting.

And tonight, I was sure of it. He was out there.

I continued making my salad and fixing my plate pretending nothing was wrong. But deep inside I had a bad feeling in my stomach. My senses were on high alert. Then, I heard it again.

Okay. That’s it. He’s coming to get me; I just know it. This is going to be the end! I warily crept to the window to peer cautiously outside. I really didn’t want to look outside, but for some unknown reason I couldn’t help myself. (And kids, this is where it gets really scary, so you might just want to skip down to the end.) I just got my faced pressed against the window so I could see out into the darkness when all of a sudden, this raging lunatic jumped from the doors of my basement right against the window!

“EEEEEKKKKKKKKK!!!” I screamed and stumbled backwards into my chair, cracking my leg against the seat. I was a goner. I just knew it. This was it. He was going to get me!

My heart flew into my throat and I would like to say that my fight response kicked in and I leaped towards the window to give that bad guy the what for, but unfortunately, my flight response took over, as it always does, and I was headed for the door.

But wait, that scary fellow was wearing some camouflage clothing very similar to the outfit my older son wears out hunting. Where was my older son anyway?

And so, my would-be attacker turned out to be my mischievous son looking to scare his mama. And he succeeded.
Pretty scary, huh?

Hope I didn’t give you nightmares, cause I’m pretty sure I’m going to have some.