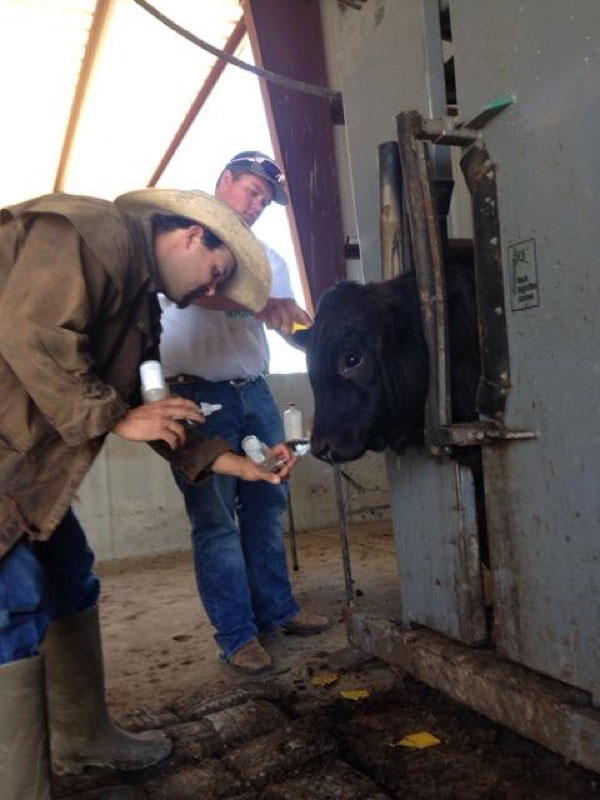 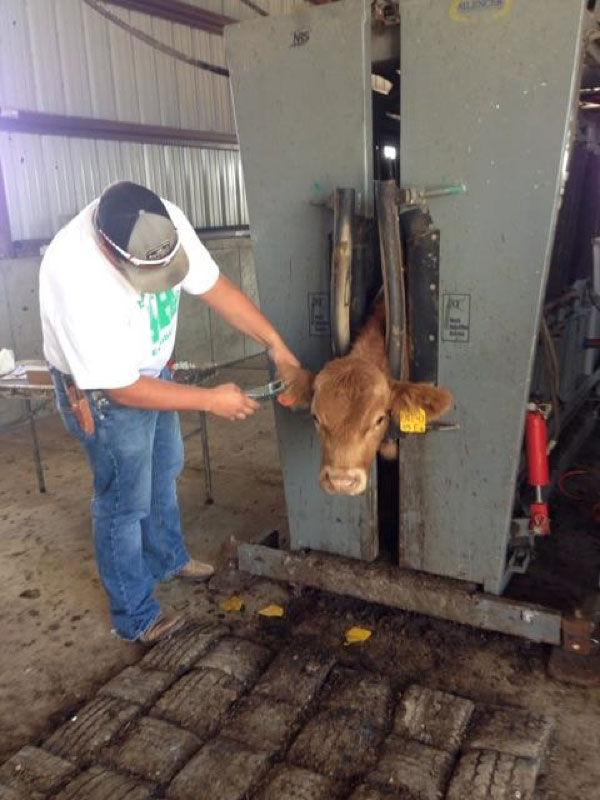 The pens at the feed efficiency testing center have filled up with bulls, so I thought I would show you how we process the new arrivals.

Right after the cattle arrive, we move them to their pen which is filled with nice, clean bedding; bunks filled with feed; and clean water. We like to let the calves relax and recover from their haul before we process them through the chute.

Then, in the next day or two, we work them. When we process the calves, we vaccinate them against viral infections. This is similar to humans getting the flu shot. Respiratory illness is the leading cause of sickness in cattle, so we vaccinate all the cattle that come in to try to minimize sickness.

Two of the vaccines are given as injections in the neck, and two of them are administered intranasal. That’s what Joe is doing here. The calves don’t really know what to think about this procedure and sometimes they blow their nose and you feel like you’re just dumping the vaccine on the ground, but the vets and researchers insist that is not the case.

Next, we test them for PI (persistently infected) BVD (bovine viral diarrhea). This is a disease that can affect cattle and it can be a silent killer. Infected cattle may not show any symptoms, but they can be shedding the virus even though they aren’t physically sick themselves. Any animal that tests positive for PI BVD is sent home. Luckily, we haven’t had a positive case for several years. 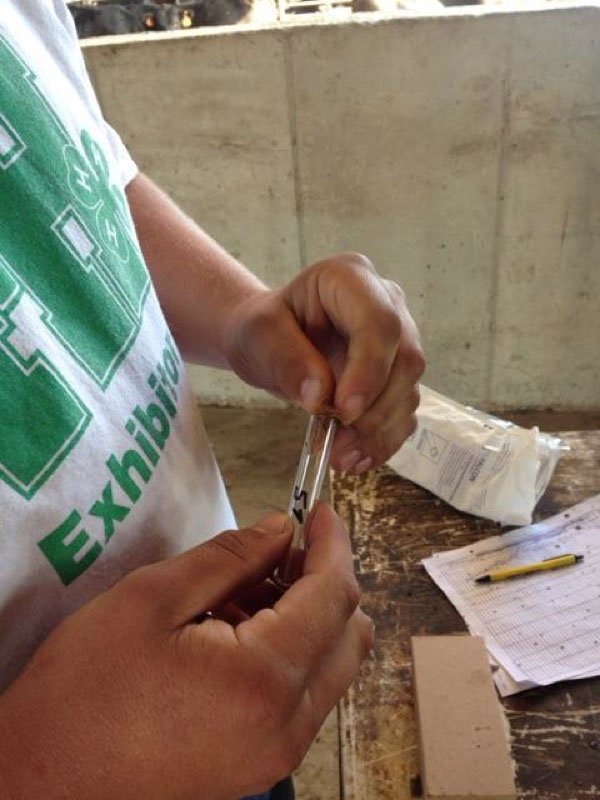 To test for PI BVD, we take a tissue sample from the calf’s ear, place it in a test tube, and send it to a vet lab for testing.

We also deworm the cattle when they come in. I forgot to take a picture of that, but we spray the de-wormer down the calf’s back and this gets rid of the internal parasites in the calf. 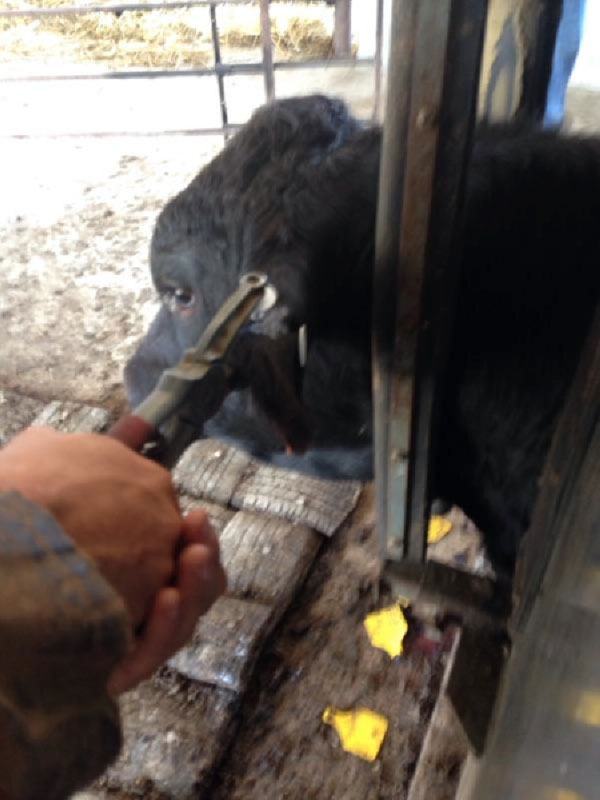 Then we put and EID (electronic identification) tag in each animal. (Sorry the picture’s blurry. It was hard to get Joe to go in slow motion so I could take his picture.) This little EID is the core of the whole operation. This tag tells the computer what animal is eating and how much he is eating. Every time an animal sticks his head in the bunk, the computer records who it is and weighs how much it eats.

Every day, twenty-four hours a day, the system is monitoring individual consumption. It’s fascinating data, really. I love to talk about it, but I’ll try not to bore you all with it today. But if you have any questions, don’t hesitate to ask! 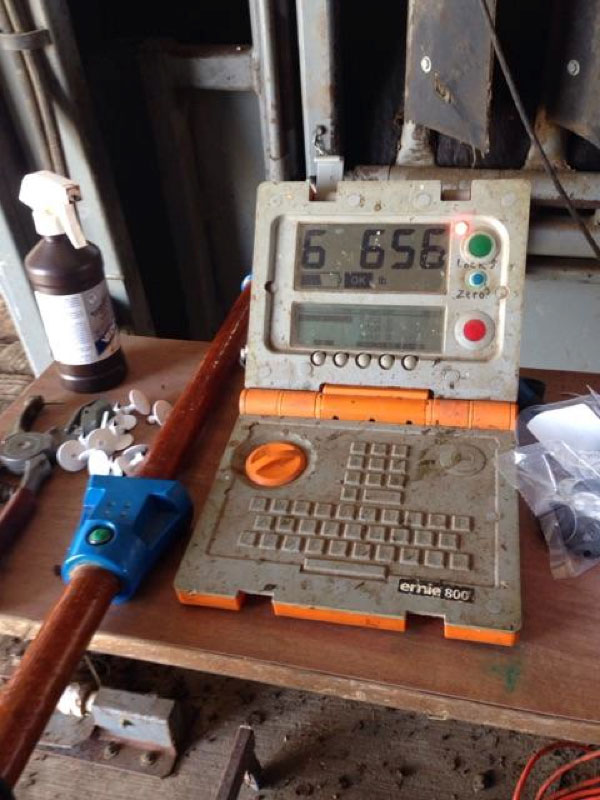 And finally, we weigh each bull. This is the first of many times this animal will be weighed. And actually, this weight is not an official weight, but rather a data point that I collect mostly because they are going through the chute and it’s so convenient.

Anyway, this whole process of working the cattle through the chute the first time takes less than a minute an animal. And then the bulls go back to their cozy pen and resume the normal routine of their day.

The official test will start in two to three weeks when the cattle will be weighed again on two consecutive days with those weights being averaged which will be the official “On-Test Weight.”

The period between now (first processing the calves) till their on-test date is called a warm-up period. It allows the animals to get used to their new surroundings, adjust to eating out of the feed intake bunks, and just kind of get settled in.

So that is what we do each time new cattle arrive at our facility. Our job is to do everything in our power to keep the animals healthy, happy, and well cared for. And we pray we will be able to do just that.

Thanks for listening and if you have any questions about anything, just let us know.