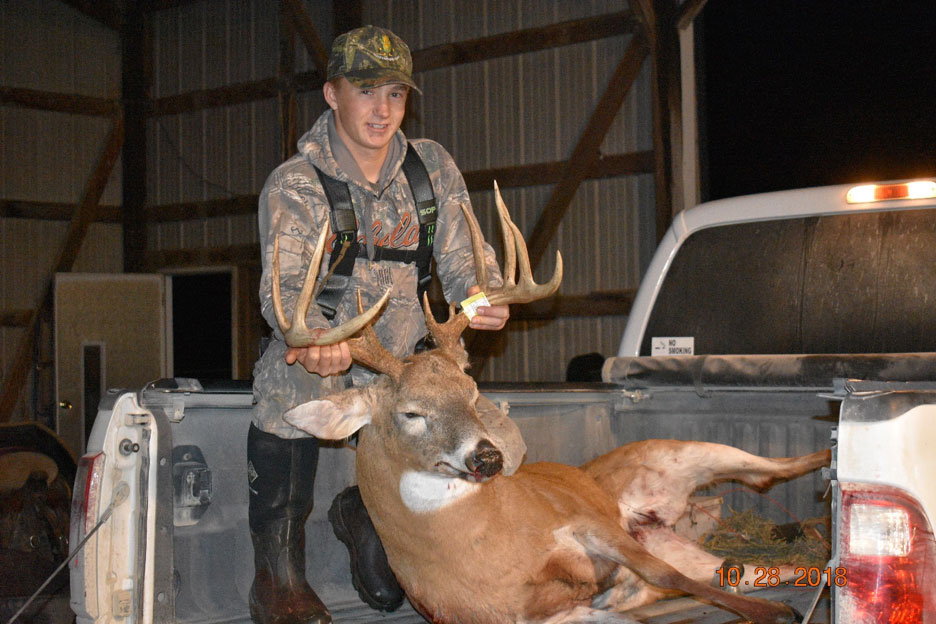 Rhett shot a nice buck with his bow this weekend.  I’m always amazed when he gets a deer bow hunting.  I mean, it just looks so hard!  But since he was little, he has had the patience and persistence to hunt with the best of them.  This kid lives and breathes hunting.  He scouts the deer, and studies their habits, and plans and strategizes his hunts.  Any free moment he has, he is either building another tree stand or studying a hunting video to learn more about it.

He makes it look pretty fun, actually, which is why Abby and I decided we should go with him on Sunday.  We wanted to see what it was all about, and we thought we would be a huge asset to the team.  Unfortunately, Rhett did not think this was a good idea.  I can’t understand it!  We begged and pleaded and assured him we would be the best darn hunting partners he could ask for.  We could be quite if we had to.  We would even wear his silly scent-blocking stuff (which I am completely convinced does not work), but to no avail.  He just didn’t think we were quite cut out for hunting.  Plus, the stand he was going to was only made for one person, darn the luck, so he was afraid he would have to leave us behind.

Shucks.  Abby and I were bummed.

But wait!  Rhett consented to allow us to go to his double tree stand (that is a stand that will hold two people) although the wind was all wrong and he was sure we would scare all his deer way for the next century.  But Abby and I didn’t care.  We just wanted to go hunting!  So Rhett headed to his stand and Abby and I to ours.

Oh, did we have fun!  The day was perfect.  Sunny.  Warm.  Slight breeze.  Gorgeous.

Somewhere along the way, we decided maybe we should make a deer call and try to attract deer.  So we found some YouTube clips on my phone—one was a buck grunting and one was a doe in estrus.  Which one did we need?!  We had no idea, so we played them both.  HA!

I’m not sure that the calls had anything to do with it, but about ten minutes later, we go to witness something pretty cool.  We heard this racket behind us.  Something was running through the corn!  Suddenly, out darted a racoon followed closely by two coyotes.  The coon barely escaped with his life to the safety of a tree while the coyotes stood at the bottom, looking longingly up at their supper that got away.  We’d never seen anything like that before.  (And we realized we wouldn’t be very good wildlife photographers, either, because we didn’t get a speck of the episode on film.)

Then Rhett texted us that he had shot a deer so we headed back to help Rhett and called it a day.  But it was so much fun, Abby and I are thinking we might just have to go out again next Sunday.  We’re really getting into this hunting thing!

Hope you all have a great day!