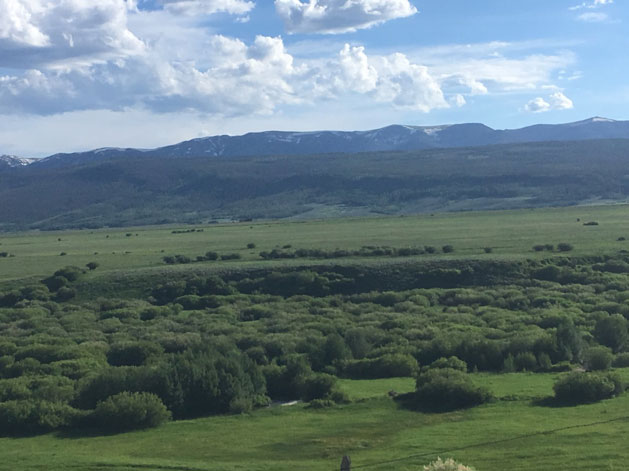 Hello everyone! I’ve been meaning to do this blog for the last couple weeks, but just haven’t gotten around to it. Today is the day though!

So a couple weekends ago Dad, Mom, and we kids went up to a ranch in the mountains where some of the Leachman bulls are staying to be PAP tested,( to see if they can hold up in high altitude). We also went to where the heifers are so we could pick up the pasture bulls. It was a fun weekend. We left Friday morning and got back Saturday evening. It was so pretty in the mountains!

We ended up working about 100 bulls. 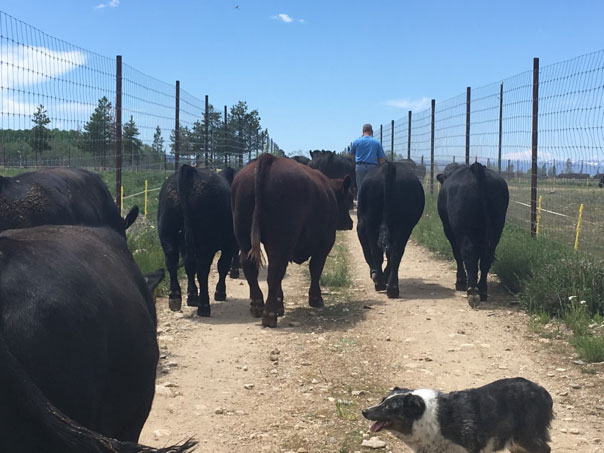 There are 13 pens that the 500 bulls are in. To get to them you have to walk up and down all these alleys! Our feet were so sore afterwards! 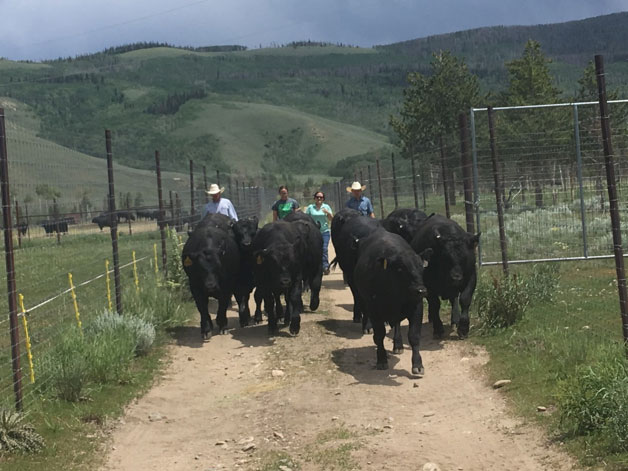 You can see that the fences are really tall. Well, this place used to be an elk ranch, so things are built a little different, but it’s really cool to see!

Here’s one pen of bulls. They looked happy! 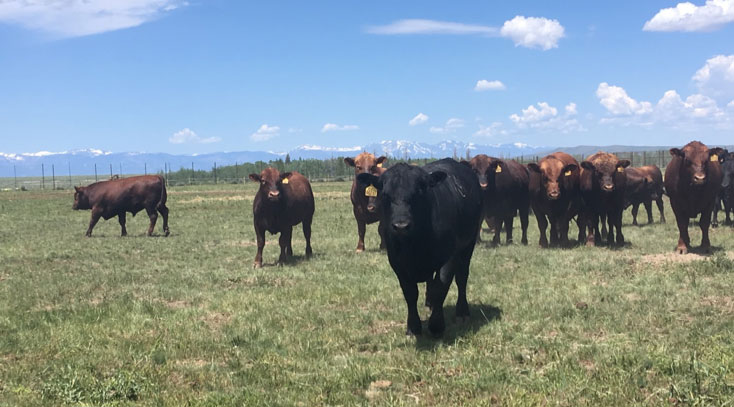 And another pen. You can see the mountains in the background. They were so fun to look at while bringing a group of bulls up the alley. I did decide they would be just as pretty on the back of a horse instead of foot, though! 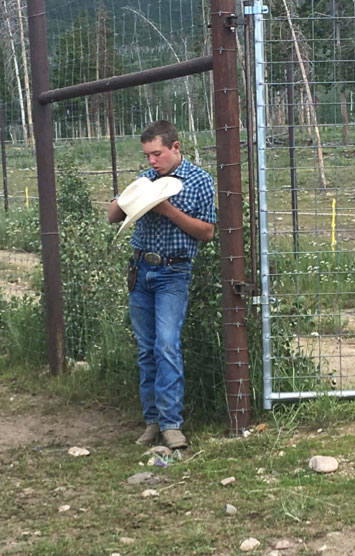 Cody liked picking some pretty purple flowers. He would hand them out or stick them in his hat… But don’t let him know I told you. He made sure he had them plucked out of his hat if he met someone. 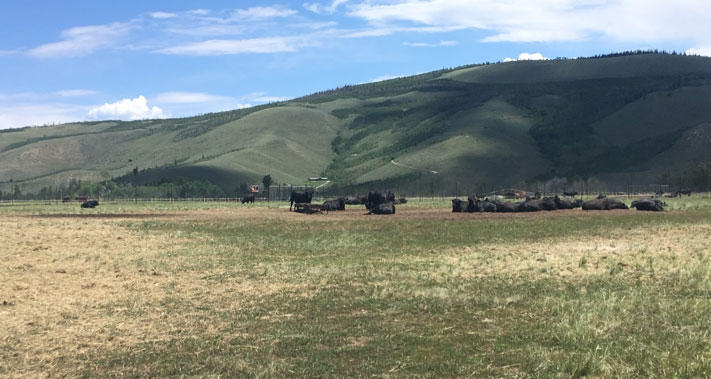 There were gorgeous views in all directions! It’s really a different place up there. There’s no cell phone service, anywhere. You can’t call when you have a question. You’ll have to walk all the way back to make sure the guys didn’t forget that they were coming to help! Lol! I know because it happened!

Anyway we got done with the bulls late afternoon, and started our way to the heifers. We stopped in the only town along our way for supper, and a motel room. The only problem was that they were all sold out!!! So we headed on down the road to try to find a motel somewhere close by. I had the map in my lap looking for towns that might have motels. Then when we got some cell phone service we would call and see if there was availability. We called about 8 places. They gave us the same message… All booked!! It was dark by then. We pulled off the road by a little campsite place that we thought might have a motel. Nope all booked too! We were seriously considering just sleeping in the truck, but we FINALLY found a motel 70 miles the other direction to stay at. We entertained ourselves by seeing who could say tongue twisters the fastest! It was very comical. We rolled into the motel a little after 11:00 P.M. for some shut eye! 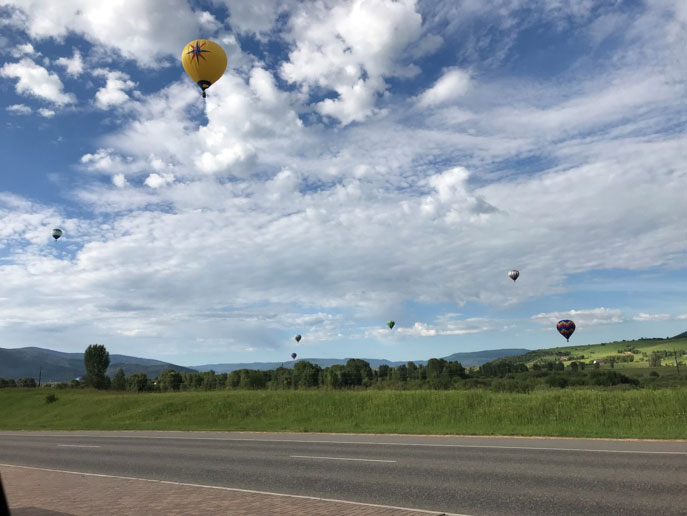 One cool thing about the town was that they were having their hot air balloon rodeo days! It was really cool to see them all! 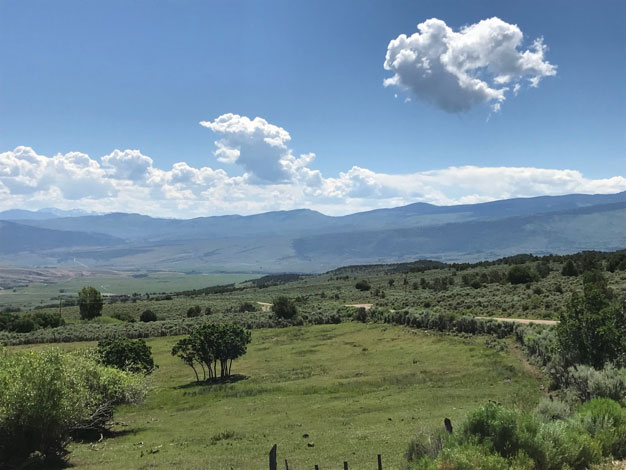 Here’s the valley that we went through as we were going up to the heifers. It was really pretty here, too. After we got 8 bulls and a heifer (she was starting to get brisket disease) we started back down, and when I say down, I mean down. The road twisted and curved, went up and down, until Mom was sure she was going to die! Lol! Mom does not like heights or mountain roads, so when you add a loaded trailer to the mix you can imagine what happened! 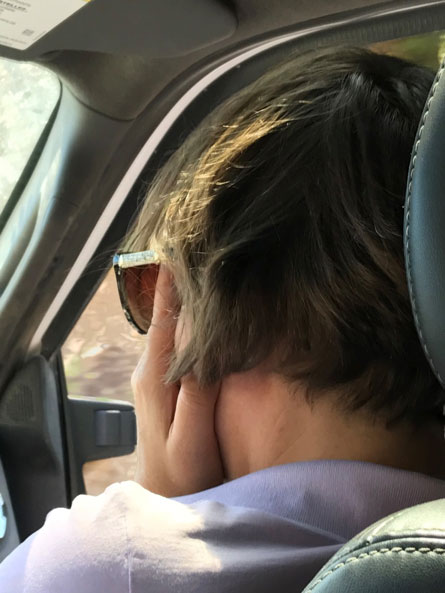 Yep, she was like this most of the time. When she did open her eyes they would go shut pretty quickly as soon as she saw the grade decent sign. It was a little sketch sometimes. Nothing that Dad couldn’t handle, but the truck had to work extra hard sometimes! 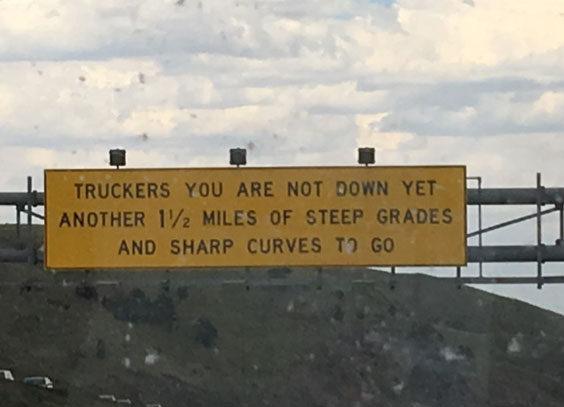 The people that wrote the road signs did have some humor! One sign said something like “Don’t be fooled truckers, 6 more miles of steep grades and sharp turns to go”. Those signs really made mom feel better! 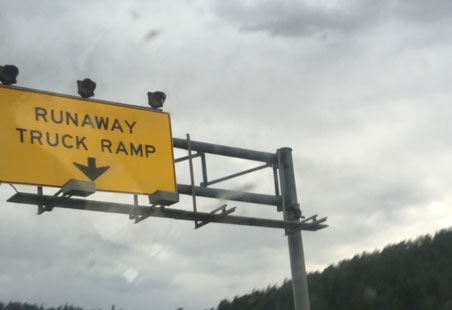 This was a comfort!

There was a town exit sign that said “if you’ve lost your breaks don’t exit here”! We don’t want you! Lol! No it was actually because the exit ramp was straight down hill, and the other side went straight up. So truckers might have ramped it like Dukes of Hazzard! Mom confided to us that she was never leaving the house again. Then she saw a help wanted sign, and she really wanted to just take it so she wouldn’t have to ride down the mountain! Don’t worry though! She made it home with us, and has left the house! I don’t know if she’ll ever go back to that ranch, but at least she’s ventured away from the house!

All in all it was a fun weekend! I think it will be one to remember!!

Hope you have a great day, and stay on flat ground!!