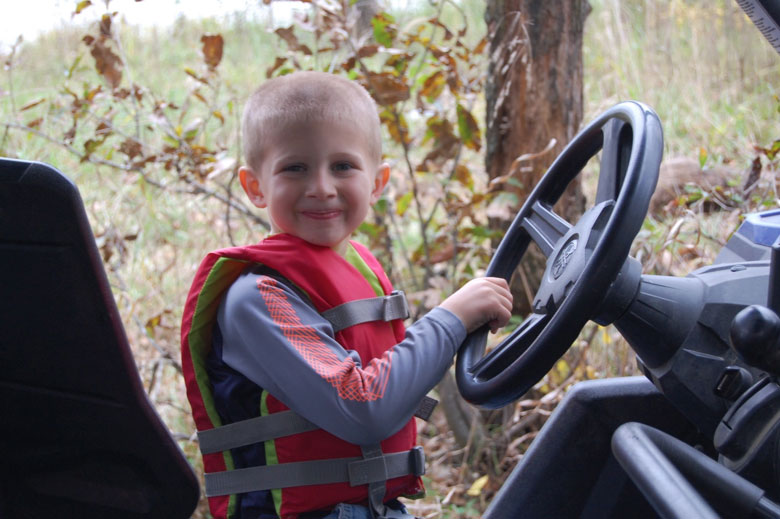 Saturday was Cody’s birthday. And to celebrate, we headed down to Missouri to spend the day fishing and relaxing at the Hundred Acres. (That’s the name of the pasture which conveniently has a cabin, a large pond, and canoes for us to enjoy.)

And I should really be posting about Cody and what a great nephew he is, as it was his birthday and all, but unfortunately, the day will forever be etched in our minds as The Day of the Great Fishing Pole Debacle.

It all started when my 5-year-old nephew found out we were planning to go fishing. And not just fishing from the shore, but fishing from a boat. He was so excited. He just couldn’t wait to try it out. And he most assuredly needed his fishing pole. Not Aunt Bon’s. Not his cousins’. Nothing but his bright red Spiderman fishing pole would do. He was insistent.

So we retrieved his very own, very favorite fishing pole and headed out. And I’m sure Ty will be forever grateful that his aunt followed his wishes and got his pole. And not only that, but she willingly volunteered to get in the boat and take him out on the pond. And not just anywhere on the pond, but to the very middle. He was specific in his location. And having raised an avid fisherman myself, I knew just how important it was to get to just the right spot.

My sweet little nephew was bursting with excitement. He was sure he would catch a monster. He confidently cast his line in the water and it was a beautiful cast. Right out to the middle of the pond. This was going to be a money cast. The biggest fish in the pond was sure to bite. He just had to.

And just as his lure hit the water, his pole slipped out of his hands and fell from the boat right to the bottom of the pond. It didn’t float for even a second. We sat in stunned horror and watched the most bestest fishing pole in the world disappear into the murky depths of oblivion. It was tragic. It was life-changing. It was a moment in a young fisherman’s life that he will never forget. Oh the heartbreak!

And in my mind, I was there to give my nephew the kind condolences such a loss requires. I was there to give him a hug and assure him everything was going to be alright. That these things happen, and it was an accident. And don’t cry, honey, as I know it seems like a huge deal right now, but in the grand scheme of things, it’s only a fishing pole. In my mind, I was doing a bang-up job of making my sweet nephew feel better.

But in reality, I was laughing. I couldn’t stop. Every time I’d try to come up with something comforting to say, it would come out in a great big chuckle. What was wrong with me?! Where was my sense of compassion?! I tried several times to say something helpful, but finally I gave up. It was just too funny.

And my nephew, who at this point had decided Aunt Bon was not the person he wanted to talk to right now, started crying for his mama. And not just crying, but loud, gut wrenching howling. And when he realized she was still in Iowa, he started wailing for Aunt Beck. Anyone but Aunt Bon!

So I dutifully rowed him to shore where Aunt Beck and his little brother were standing full of concern and compassion. And his little brother had obviously taken Grief Counseling 101 with his Aunt Bon because his words were a great comfort to his brother. They went something like this:

“What happened, Ty? Did you drop your fishing pole?”

To which Ty replied with even greater wails.

“Is it in the bottom of the pond?”

This line of questioning was too much for me. I erupted in laughter yet again. I have a serious problem!

Immediately, Aunt Beck took control of the situation and sent the two grief counselors out on the boat to the middle of the pond…out of ear shot. She busied herself with consoling our little fisherman and successfully salvaged our day.

In the end, it was a great birthday party and a very memorable day. And I’m pretty sure I’ll be receiving “Aunt of the Year” recognition very soon.